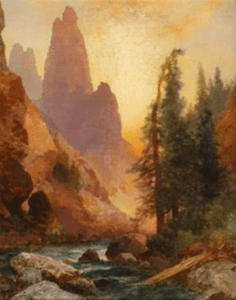 The East Hampton Historical Society, stewards of the Thomas & Mary Nimmo Moran Studio, have announced their newest exhibition: Thomas Moran Discovers the American West, on display from June 29 until November 9, 2019.

The exhibition details Moran’s adventurous participation in the 1871 Hayden Expedition to Wyoming, and explores its impact on both the art world and the National Parks Service.

The exhibition traces Thomas Moran’s empowerment as an artist as he explored the American West on a trajectory to become one of the leaders of both the National Parks movement, and a small group of artists who promote America’s pride in its landscape and natural wonders.

The substantial portion of this exhibit is material that is returning to Moran’s Studio after being gifted to Yellowstone National Park in the 1940s. This collection of his watercolors, a sketchbook, oil paintings and even the pistol he shot a rattlesnake with, form the core of what will be an illustrated story of Thomas Moran and his help in making Americans appreciate their natural treasures.

“Thomas Moran Discovers the American West”  is on display at the renovated Moran Studio, located at 101 Main Street, East Hampton.

The turreted Queen Anne shingled piece of Victorian architecture is a registered National Historic Landmark, was recently added to The Historic Artists’ Homes and Studios (HAHS) Program of The National Trust for Historic Preservation.

This special exhibition and its associated educational programming are part of the second year of operation for the Moran Studio.