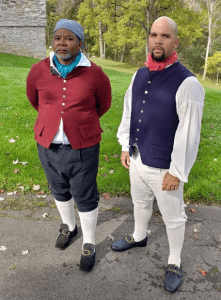 The Sackets Harbor Battlefield State Historic Site has announced Slavery, Freemen, the War of 1812, and A House Divided, has been set for Saturday July 6, 2019 at 1 pm.

Attendees will have the opportunity to discover the story of slavery in New York State prior to the Revolutionary War, learn about African-American men serving at Sackets Harbor on combat ships in the War of 1812, and visit the historic site commandant’s house, home of a Southern-born Navy officer on the eve of the Civil War.

“To Be So Confin’d: Complexities of Slavery in 18th Century New York” is a mini-play staring Frederick Jones and Donald Hyman, offering a dramatic presentation on Northern slavery. Learn about the intricacies of that bondage within one household, that of Major-General Philip Schuyler in Albany.

After the mini-play, Anthony Gero will tell about the military role African-Americans played during the War of 1812. They served in crews on board US navy ships at Sackets Harbor, in the US Army, and in the NYS Militia. Gero, a retired teacher, has a Master’s degree in history from S.U.C. Cortland. He authored the book Black Soldiers of New York: A Proud Legacy.

Afterward, participants can tour the historic site’s navy commandant’s house where the Georgia-born commandant lived in 1860. Discover what happens when he learned fellow Southern Navy officers were resigning to fight for the Confederacy. Josiah Tattnall’s dilemma places in jeopardy the lives of his household members and his long naval career.

Programs will be held in the Navy Yard at the end of Main Street, or if raining, in the site’s barn off Hill Street. Presentation and talk are free of charge. Commandant’s House tours are: $3 adults, $2 seniors and military, children under 12 years of age free.