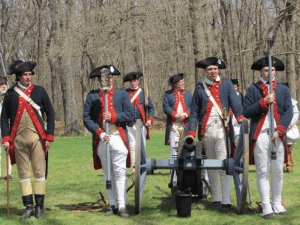 The stone 1754 John Ellison House was the headquarters for Generals Nathanael Greene, Henry Knox and Horatio Gates during the American Revolution. General Knox, during his 1780-81 period of residence, brought along 300 soldiers of the 2nd & 3rd Continental Artillery regiments, who camped a mile away.

The soldiers built huts out of the surrounding forest and waited for warmer weather. In the spring, the camp was a whirlwind of activity as the men prepared their artillery and trained. Knox coordinated the movement of various pieces from all over the northeast to the encampment site. Planning to join an attack against British-held New York City, they instead headed to Virginia, to decide the destiny of our new nation.

From noon to 4 pm, visitors can learn about the use of 18th century artillery and how the Americans at New Windsor prepared some of the guns, howitzers and mortars that were used at the siege at Yorktown, Virginia. The guns are fired every half-hour and the ambitious can help move it into position.

The long barrel artillery piece or gun was a dominating presence on most of the battlefields of the American Revolution. Firing solid iron balls out to distances of 1,000 yards and deadly shotgun blasts of caseshot, small iron balls in a tin canister up to 300 yards, the gun devastated enemy formations. The larger versions battered down walls and smashed holes in great warships.

For more information call (845) 561-1765 ext. 22. This event is free and open to the public. Knox’s Headquarters is located at 289 Forge Hill Road, at the intersection of Forge Hill Road and Blooming Grove Turnpike (Route 94) in Vails Gate.

Photo of The 2nd Continental Artillery provided by Knox’s Headquarters.