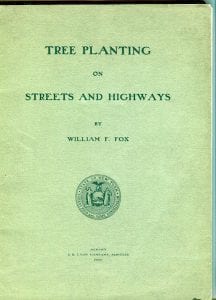 Born William Freeman Fox on January 11, 1840, in Ballston Spa, just miles from the tree nursery on Route 50, he studied engineering at Union College for three years. In 1862, at 22, Fox joined the Army of the Potomac as a Captain commanding Company C of the 107th New York Volunteer Infantry. Shortly afterward, he saw his first combat in at the Battle of Antietam, considered among the bloodiest days in U.S. history. Fox was wounded in this battle, as well as at the Battle of Chancellorsville, where he served as a Major, and the Battle of Resaca, where he served as a Lieutenant Colonel. He was discharged from the U.S. Army on July 8, 1864.

Fox was Assistant Forest Warden from 1888 to 1891 and oversaw the Fire Wardens – the predecessors of today’s Forest Rangers. When he was appointed the first Superintendent of Forests, he continued his oversight of the Fire Wardens. Unsatisfied with the program, Fox called for “forest rangers” to replace the wardens. He is credited with making New York the first state in the nation to put forest fire protection under public authority. Shortly after the Conservation Department was formed in 1911, the title, duties, and responsibilities of Forest Ranger were established. (You can read more about that here and here.)

In 1898 Fox proposed that burned-over barren lands in the state be replanted. In response, New York created one of the nation’s first tree nursery and reforestation programs. The tree nursery program began in 1902. More than 1.6 billion seedlings have been produced by New York’s tree nursery system to enhance and protect our forest resource.

The State nursery in Saratoga, now the Colonel Fox Tree Nursery, was established in 1911 and is believed to be the oldest state tree nursery in the country. In the decades before the Second World War, the nursery’s primary mission was to grow conifer seedlings for water supply protection, soil protection, and for timber plantations to ensure a steady supply of lumber.

In the early 1930s the State began the reforestation system by acquiring abandoned farms. Most of this land had to be planted to protect the soil. Nursery production rose to meet the demand and peaked in 1938 at 72.8 million seedlings produced for planting just in that year. These plantings were mainly accomplished by the Civilian Conservation Corps (CCC, read about those here).

The tree nursery’s mission became more diverse when DEC was established in 1970. Along with traditional forest seedling production and wildlife shrubs, the tree nursery also began to produce trees and shrubs for remediation, wetland restoration, and riparian protection, with a focus on growing native species from local seed sources.