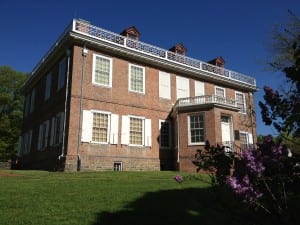 The Schuyler Mansion State Historic Site in Albany has invited the public to attend an old-fashioned Independence Day celebration on the mansion grounds, on Thursday, July 4th, 2019, from 11 am to 4 pm. This event is free and open to the public.

There will be a variety of 18th century inspired activities that may be sampled throughout the afternoon and demonstrations of candle-dipping, tin-smithing and natural dying. “Dr. Stringer,” Philip Schuyler’s physician, will discuss the subject of 18th-century medicine, including the use of leeches, bleeding, and oxygen.

The day will also feature a special appearance by the Gratto Variety Show, who delights crowds with juggling, stilt-walking and other amazing feats of daring, along with performances of the historic Punch & Judy Puppet Show, presented by Punch Bowl Sister and Rural Felicity, who will regale the crowd with the Fife & Drum.

In addition, Schuyler Mansion will offer a “Hands-On History” tent where children and their families may enjoy signing the Declaration of Independence with quill pens, crafts, and playing with colonial games and toys Schuyler Mansion will be available for Open House (self-guided) tours from noon to 4 pm at $3 per person (children 12 and under free). Visitors may take this opportunity to tour Philip Schuyler’s elegant 18th-century home at their leisure.

Free Stewart’s Shops ice cream will be available. Along with Friends of Schuyler Mansion, Stewart Shops, and the Times Union are supporters of this special family event.

Schuyler Mansion is located at 32 Catherine Street in Albany’s historic South End and was the 18th -century home of Revolutionary War Major-General Philip Schuyler (1733-1804) and his family. Further information is available on their website.