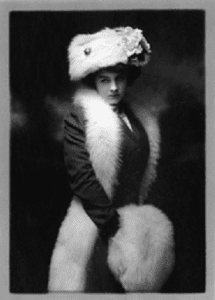 The Jeanne Robert Foster papers are available at The Adirondack Research Library of Union College.  Jeanne Robert Foster (1879-1970), born Julia Elizabeth Oliver in the Adirondacks, had numerous vocations during her lifetime: fashion model, literary editor, poet, and social worker. During the 1920s, she became immersed in European literary and artistic circles, including a friendship with Irish poet William Butler Yeats.

The 1920s also saw her involvement in the Czech Nationalist Movement. The second half of her life was focused on social work in Schenectady, New York, culminating in an award from the Mayor of the city. In 1970, she was given an honorary degree from Union College and died shortly after. She is buried beside John Butler Yeats, father of William Butler Yeats, in Chestertown, Warren County.

The collection includes biographical information, correspondence, unpublished manuscripts, poetry, photographs, scrapbooks, and ephemera. The materials are particularly rich in correspondence and reflect Foster’s unpublished writings, including hundreds of ‘hidden’ poems. While Jeanne Robert Foster’s early experiences are documented in the papers, the collection also illuminates her community service to Schenectady in her later life. Her papers highlight an extraordinary life and the contributions she made to the arts of humanity of her time.

Does your historic site, museum, library, or archive have a publicly accessible collection you’d like featured at The New York History Blog? Send along a relevant photo, and description of the collection using the above format to nyshistory@gmail.com.

This post is provided by the New York State Archives Partnership Trust, which was founded in 1992 to build an endowment, provide support for humanities programs, and to increase access and support preservation of New York’s historical records held in the New York State Archives. The Partnership Trust is a 501(c)(3) non-profit organization whose programs and projects include the Research Residency Program, the Student Research Awards Program, history conferences, special exhibitions, public education programs, book signings and lectures, publications, teacher training institutes, preservation projects, and more. Learn more about the Archives Partnership Trust at their website nysarchivestrust.org.