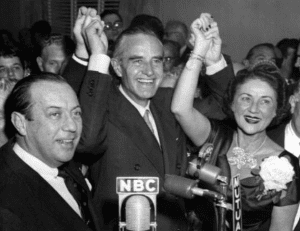 W. Averell Harriman served as the Governor of New York from 1955 to 1958. A collection of records held at the New York State Archives, which cover both Harriman’s 1954 and 1958 campaigns, include copies of speeches, addresses, press releases, correspondence, party platforms, and fact sheet binders.

Also included are the reference materials used by Milton D. Stewart, who served as Harriman’s assistant during these campaigns and would later serve as the Executive Assistant to the Governor’s Counsel, and the records provided to Harriman with information about the condition of the New York’s state and local governments and such things as the state’s dairy market, education and public works projects, particularly highways.

Does your historic site, museum, library, or archive have a publicly accessible collection you’d like featured at The New York History Blog? Send along a relevant photo, and description of the collection using the above format to nyshistory@gmail.com.

This post is provided by the New York State Archives Partnership Trust, which was founded in 1992 to build an endowment, provide support for humanities programs, and to increase access and support preservation of New York’s historical records held in the New York State Archives. The Partnership Trust is a 501(c)(3) non-profit organization whose programs and projects include the Research Residency Program, the Student Research Awards Program, history conferences, special exhibitions, public education programs, book signings and lectures, publications, teacher training institutes, preservation projects, and more.  Learn more about the Archives Partnership Trust at their website nysarchivestrust.org.

Photo of victory celebration for the election of Averell Harriman as governor of New York, 1954. The celebration was held at the Biltmore Hotel in New York City. Harriman, in front of microphones, raised the arms of his wife Marie and New York City mayor Robert F. Wagner, Jr. From NYSA Series 13703-08.