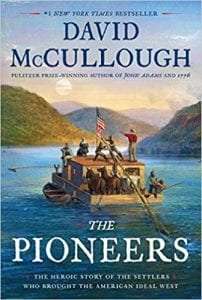 The title is somewhat expansive. The book really is not about pioneers generally or the west as a whole. It is mostly about the development of Marietta, Ohio, the surrounding region, and to some degree the state of Ohio and the Northwest Territory. But some of its insights presented by McCullough may be applicable to the development of the western part of the country as a whole.

As usual, McCullough is superb. He has the ability to make the reader feel right there in history, alongside the characters he features in the story. He writes so that you feel their emotions, their problems and setbacks, and their triumphs. He develops a story of persevering over the challenges of the wilderness, building a community, and developing a culture (many of the first settlers were from Massachusetts and they brought their values with them).

He is particularly good on the importance of families, the central place of religion and faith in their lives, how they built representative government, their emphasis on both public and higher education, and their determination to exclude slavery from their new home territory.

The Pioneers is worth reading for another reason: it could serve as a model of research and writing for many communities here in New York. Their stories are arguably as important as Marietta’s. This is McCullough’s first entree into local history; his previous books have been mostly about grand projects, such as the Brooklyn Bridge and the Panama Canal, and grand leaders such as John Adams and Harry Truman.

All of us concerned with local history may find his comments on why he chose this topic and how he did the research to be particularly interesting.

Part of it was coincidence, he says in the “Acknowledgements” section of the new book: he was invited to give the commencement address at Ohio University in Athens, Ohio, about 50 miles from Marietta, on the 200th anniversary of the university’s founding. That speech, which he included in his 2017 collection of speeches The American Spirit, emphasized the need to consider the past when trying to understand the present. In that speech, he said: “When bad news is riding high and despair in fashion, when loud mouths and corruption seem to own center stage, when some keep crying that the country is going to the dogs, remember it’s always been going to the dogs in the eyes of some, and that 90 percent, or more, of the people are good people, generous-hearted, law-abiding, good citizens who get to work on time, do a good job, love their country, pay their taxes, care about their neighbors, care about their children’s education, and believe, rightly, as you do, in the ideals upon which our way of life is founded.” But the visit to Ohio University also got him interested in Ohio history.

His second inspiration, he says, was Thornton Wilder’s 1938 play Our Town. The play is about a fictional American town, Grover’s Corners, between 1901 and 1913, through the everyday lives of its citizens.

His third inspiration was Conrad Richer’s trilogy of historical novels, The Trees (1940), The Fields (1946) , and The Town (1950), which won a Pulitzer Prize in 1951. Like McCullough’s new book, they are set in Ohio and view events though the eyes of individuals. He refers to the three novels as “among the finest ever works of American historical fiction” and says they gave him “good feelings about pioneer times in Ohio.” In fact, The Pioneers reads like a good novel.

As a reviewer for NPR noted, “like McCullough’s other books, The Pioneers succeeds because of the author’s strength as a storyteller. The book reads like a novel, with a cast of fascinating characters that the average reader isn’t likely to know about; while history textbooks use broad strokes to paint the picture of the early settlers to the Northwest Territory, McCullough takes a deep dive, and does so with assured, unshowy prose.”

McCullough has described the book as the against-the-odds story of determined, resilient people. In an interview on C-SPAN, he said the book is “about a very brave, and I feel, noble people, Americans who went west in the last part of the 18th century to found the first legal community, settlement, in all of what was called the Northwest Territory…” It “would take an enormous amount of work and they would have to face adversity and setbacks and sufferings the likes of which they had never experienced or imagined.”

The book has drawn some critical comments for its portrayals of Native Americans in the region. The “settlers” in the book really were not moving into “unsettled” lands. But the book seems balanced and insightful on the topic of relationships between people already there and newcomers from the east.

One other thing to note was that many of the sources he needed and used were at Marietta College and other Ohio repositories. He praises the librarians and archivists who helped him. McCullough kept a diary while doing research and recorded his first visit to Marietta College in September 2016: “These were two of the very best research days ever – the material beyond anything expected and the librarians and Marietta history specialists among the best and most good-spirited I’ve ever worked with. The time spent has expanded my feeling for the subject in a way nothing else could have.” One of the reasons that the book is so vivid and readable was that he was able to draw on letters, diaries, and other materials to let historical characters speak for themselves through extensive quotations.

Local history is always interesting and often provides the forum for telling human interest stories and stories about community development. McCullough’s book is particularly welcome on this 100th anniversary of the New York law establishing Local Government Historians. As State Historian Devin Lander has noted, New York was the first state to pass such a law. So far as I know, it is the only state with such a law. Local historians, historical societies, archivists, librarians, and others are at work every day in our state to collect, preserve, assemble, and make available just the sorts of materials that McCullough used in his book. Local history is important. As New York State Historical Association president Dixon Ryan Fox wrote in a 1921 article in the journal Political Science Quarterly, “local history is a rewarding study…. In local history the citizen finds use, in that it can reveal the origins and growth, and thus the nature, of the institutions and the social groupings with which he has to dwell and deal…. But in this study there is likewise scientific value, for in the smaller field of vision we can sometimes see the ordinary undistinguished individual in his relation to society and the little human group in its relation to the soil, the climate and the contour of the land.”