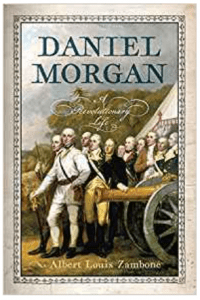 Dr. Albert Zambone is set to give a presentation on how Daniel Morgan helped secure the victory at the Battles of Saratoga, on Thursday, June 6, 2019 at 2 pm at Saratoga National Historical Park.

By the end of his life, Daniel Morgan had variously been brigadier general of the Continental Army, major general of the Virginia Militia, a winner of the Congressional Gold Medal, a congressman, and architect of what has been called the “American Cannae” (a type of pincer military maneouvre) at the battle of Cowpens. But one of the most important achievements was to be one of the many architects of the victory at Saratoga.

In this lecture, Albert Louis Zambone will focus on how Morgan became the man who commanded the Corps of Rangers at Saratoga, and how he put that group of riflemen together in the late Spring and Summer of 1777.

Dr. Albert Louis Zambone earned his Ph.D. in history from the University of Oxford and has received a number of scholarships and awards in the field of early American history, including a Mellon Fellowship at the Virginia Historical Society. He hosts and produces the popular audience-format podcast, Historically Thinking. Zambone is the author of Daniel Morgan: A Revolutionary Life.

There will be a book signing following the talk.