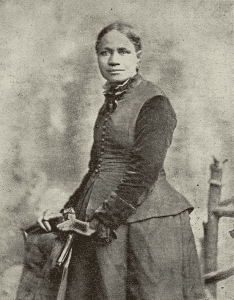 Frances Ellen Watkins Harper was born to free parents in Baltimore during slavery days. She became a teacher, writer, speaker at abolitionist rallies, and worked with the Philadelphia branch of the Underground Railroad. She was a co-founder and vice president of the National Association of Colored Women and a member of the American Women’s Suffrage Association.

New York City is planning to install a statue celebrating the women’s suffrage movement in time for the 100th anniversary of the 19th Amendment ensuring the right of women to vote in the United States. The plan is to depict Elizabeth Cady Stanton and Susan B. Anthony in the statue, two New York women who were leaders in the struggle for women’s rights. Currently there are nearly two-dozen men honored with statues in Central Park but none of an actual historic woman.

The choice of Stanton and Anthony as symbols of the suffrage movement has generated controversy. New York Times columnist Brent Staples (“When the Suffrage Movement Sold Out to White Supremacy”) charged that “official suffrage history reduces… Harper to a bit player, even though she was central to the struggles for both African-American and women’s rights and delivered what has come to be recognized as a visionary speech on the relationship between the two.” The History of Woman Suffrage (six volumes published between 1881 and 1922) by Stanton and Anthony et al reported on the 1866 meeting but ignored Harper’s speech. In another Times op-ed, Staples accused Stanton of using openly racist language.

Historian Nell Irvin Painter argues that Harper’s words were “too strong” for white suffrage leaders. They viewed her “polished, self-assured style as antithetical to what they viewed as blackness,” preferring the “uneducated version of black womanhood embodied by the formerly enslaved suffragist Sojourner Truth, who entertained her audiences as she imparted her ideas.”

White suffragists did not like Harper because she did not hesitate to challenge racism within the suffrage movement and she did not believe granting women the right to vote would immediately end injustice in the United States. In her 1866 speech Harper spoke the truth to those who desired a share of power. “I do not believe that giving the woman the ballot is immediately going to cure all the ills of life.

“I do not believe that white women are dew-drops just exhaled from the skies. I think that like men they may be divided into three classes, the good, the bad, and the indifferent. The good would vote according to their convictions and principles; the bad, as dictated by prejudice or malice; and the indifferent will vote on the strongest side of the question, with the winning party.”

Harper told her audience that she was “born of a race whose inheritance has been outrage and wrong, most of my life had been spent in battling against those wrongs.” She also declared her belief that “We are all bound up together in one great bundle of humanity, and society cannot trample on the weakest and feeblest of its members without receiving the curse in its own soul.”

Over one hundred and fifty years later, the United States needs to finally resolve some of the wrongs Harper battled against. It is also time we finally recognize “We are all bound up together in one great bundle of humanity.” A good step in this direction would be adding Frances Ellen Watkins Harper to the planned Central Park suffrage statue.