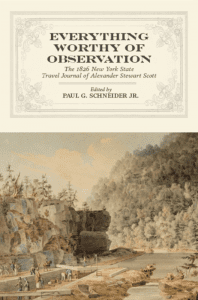 In the pre-dawn of August 2, 1826, Alexander Stewart Scott stepped aboard the steamboat Chambly in Quebec City, Canada. He was beginning a journey that not only took him across New York State but also ultimately changed his view of America and her people.

A keen observer, the twenty-one-year-old meticulously recorded his travel experiences, observations about the people he encountered, impressions of things he saw, and reactions to events he witnessed.

This firsthand account immerses the reader in the world of early-nineteenth-century life in both New York and Lower Canada. Whether enduring the choking dust raised by a stagecoach, the frustration and delays caused by bad roads, or the wonders and occasional dangers of packet boat travel on the newly completed Erie Canal, all are brought to life by Scott’s pen.

This journal also offers a unique blend of travel and domestic insights. With close family members living in both St. John’s, Quebec, Canada, and Palmyra, New York, his travels were supplemented by long stays in these communities, offering readers comparative glimpses into the daily lives and activities in both countries. Gregarious, funny, and inquisitive, Scott missed nothing of what he thought worthy of observation.

Paul G. Schneider Jr. is an independent historian and a member of the National Coalition of Independent Scholars. He lives in Saratoga Springs, New York.