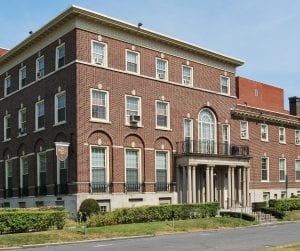 The New Netherland Institute has invited the public to their 32nd Annual Meeting on May 10th at the University Club of Albany. The meeting is free to NNI members and $10 for non-members.

The event will begin at 5 pm with appetizers and a cash bar. The business meeting will begin at 5:45 pm, which includes reports by NNI board and staff and the presentation of the 2019 Alice P. Kenney Memorial Award. Wim Klooster will give a presentation “Amsterdam’s Interest in New Netherland: The 1667 Petition to Keep the Colony.”

With the Second Anglo-Dutch War winding down, a group of seventy merchants in Amsterdam wrote a petition in 1667 in which they requested that the Dutch government negotiate a return of New Netherland to Dutch rule. “Amsterdam’s Interest in New Netherland: The 1667 Petition to Keep the Colony” will present their arguments and show that the merchants formed a remarkable cross-section of the Amsterdam mercantile elite that included a victim of the Portuguese Inquisition and a man who would later head a famous diplomatic mission to the Russian czar.

This lecture is part of the 2019 Peter Gansevoort Ten Eyck Lecture Series.

Wim Klooster is Professor of History at Clark University in the United States, where he has taught since 2003. After earning his doctorate at the University of Leiden (the Netherlands), he has been a Fulbright fellow, an Alexander Vietor Memorial Fellow and an Inter-Americas Mellon Fellow at the John Carter Brown Library, a Charles Warren Fellow at Harvard University, a Post-Doctoral Fellow in Atlantic History at the National University of Ireland, Galway, and a fellow at the Netherlands Institute of Advanced Study in Wassenaar. His work has a strong comparative dimension and focuses on revolt and revolution, maritime illegality, the Dutch empire, and Jewish trade and migration, Klooster is the author of dozens of articles and nine monographs and edited books, including The Dutch Moment: War, Trade, and Settlement in the Seventeenth-Century Atlantic World (2016), Revolutions in the Atlantic World: A Comparative History (2009), and Illicit Riches: Dutch Trade in the Caribbean, 1648–1795 (1998). Klooster has been co-editor of Brill’s Atlantic World series since 2001.

The University Club of Albany is located at 141 Washington Ave, Albany. For more information or to register, click here.

Photo of the University Club in Albany NY.