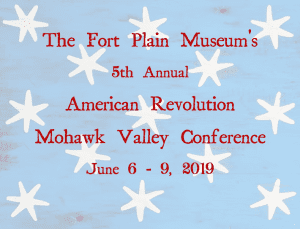 The Annual American Revolution Mohawk Valley Conference has been set for June 6-9, 2019. This is the fifth year the Fort Plain Museum has held the conference.

A line-up 12 notable historians/authors will present on the following:

Also returning is Mohawk Valley Legend, Bob Cudmore as Conference Master of Ceremonies. There is a fundraising dinner with a talk on the Mohawk Valley during the Revolution, a genealogy day and more.