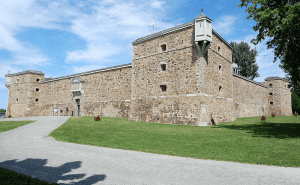 Organizations and dignitaries from Northern New York and Southern Quebec are set to join members of the Saranac Chapter, Daughters of the American Revolution, for an International Memorial Service honoring the Revolutionary War Patriots interred at Fort Chambly, Chambly Quebec, on June 1, 2019.

The memorial service will include the rededication of the monument with a new plaque, and guest speaker Former US Congressman Bill Owens. DAR District 4 representative Margaret Scuderi is expected to attend.

Transportation to and from the event is available for a nominal fee. The day’s events will include the Memorial Service honoring the patriots of the 4th Dutchess County militia, the 4th New York Line of Montgomery’s Brigade and their Commander General John Thomas, and Patriots who died of smallpox and were buried on the grounds of Fort Chambly in the Spring of 1776. Opportunities to tour the Fort and a luncheon will follow.