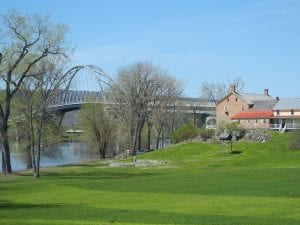 The Chimney Point, Mount Independence, and Hubbardton Battlefield State Historic Sites in Vermont on the east side of Lake Champlain are set to open for the 2019 season on Saturday, May 25, at 10 am.  These sites also host a variety of programs, exhibits, lectures, nature and history tours, and more.

Chimney Point is on Lake Champlain in Addison. Their exhibit, Crossing Paths and Point of Contact, focuses on the Native American, French Colonial, English, and early American history of the Chimney Point / Crown Point area, incorporating archaeological findings from the Lake Champlain Bridge project. The special seasonal exhibit in the ballroom is “Salmon and People in a Changing World,” from the Lake Champlain Basin Program and Champlain Valley National Heritage Partnership. It includes the successful reintroduction of the Atlantic salmon into Lake Champlain. Artist Lillian Kennedy will have a hallway exhibit, “A Brush with Nature,” and will be offering two workshops on August 10 on landscape painting. The site will be open Wednesdays through Sundays through October 13, 10 am to 5 pm. Admission is $5 for adults and free for children under 15. For more information call (802) 759-2412.

Orwell’s Mount Independence, a National Historic Landmark, is named after the Declaration of Independence. It was part of one of the largest Revolutionary War defenses built by the American Patriots, which connected it with Fort Ticonderoga by bridge across Lake Champlain. Visitors can see the museum and then choose one or more of our trails — six miles in all — to walk. On May 25 is the annual spring bird walk led by Sue Wetmore; meet outside the museum at 8 am. The year’s highlight is Soldiers Atop the Mount living history weekend, August 31 and September 1. Open daily, 10 am to 5 pm. Admission is $5 for adults and free for children under 15. For more information call (802) 948-2000.

The Hubbardton Battlefield State Historic Site is the location of the only Revolutionary War battle fought in what would become Vermont. It is one of the best-preserved battlefields in America, retaining most of its original setting. On Monday, May 27, at noon is a short Memorial Day ceremony at the battle monument. The annual battle weekend is July 6 and 7. Scores of reenactors and new offerings are expected. The site will be open Wednesdays through Sundays, 10 am to 5 pm. Admission is $3 for adults and free for children under 15. For more information call (802) 273-2282.

The last day of the season is Sunday, October 13. Other Vermont State-owned Historic Sites opening on May 26 are the President Calvin Coolidge site in Plymouth, Justin Smith Morrill Homestead in Strafford, and Old Constitution House in Windsor. The Bennington Battle Monument is open through October 31.