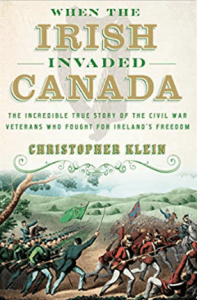 Christopher Klein, author of When the Irish Invaded Canada, is set to share the incredible true story of the Civil War veterans who fought for Ireland’s freedom on Monday, May 13 at 7 pm, at the Irish American Heritage Museum in Albany.

When the Irish Invaded Canada tells the story of a band of Irish-Americans who fled the Great Hunger in Ireland, fought on both sides of the Civil War, and then united to undertake one of the most fantastical missions in military history — to kidnap the British province of Canada, hold it hostage, and ransom it for Ireland’s independence. With the tacit support of the U.S. government, the self-proclaimed Irish Republican Army attacked Canada not just once, but five times between 1866 and 1871 in what are collectively known as the Fenian Raids.

The most successful of these attacks was launched from Buffalo, New York, across the Niagara River in June 1866. The Fenian triumph at the Battle of Ridgeway was the first victory by an Irish army over forces of the British Empire since 1745. A subsequent Fenian invasion of Canada in 1870 that was launched from Trout River, New York, resulted in the Irishmen making such a frantic retreat that newspapers joked that the “I.R.A.” stood for “I Ran Away.”

Copies of the book will be available for purchase after the presentation.

Christopher Klein is the author of four books, including Strong Boy: The Life and Times of John L. Sullivan, America’s First Sports Hero, and a frequent contributor to History.com, the website of the History Channel.

The Irish American Heritage Museum is located at 370 Broadway in Albany. Admission is $3. For more information, call (518) 427-1916 or visit their website.