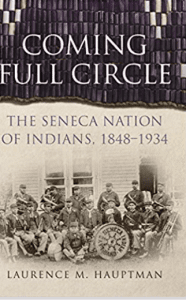 Based on the author’s nearly fifty years of archival research, interviews, and applied work, Coming Full Circle shows that Seneca leaders in these years learned valuable lessons and adapted to change, thereby preparing the nation to meet the challenges it would face in the post–World War II era, including major land loss and threats of termination.

Instead of emphasizing American Indian decline, Hauptman stresses that the Senecas were actors in their own history and demonstrated cultural and political resilience. Both Native belief, in the form of the Good Message of Handsome Lake, and Christianity were major forces in Seneca life; women continued to play important social and economic roles despite the demise of clan matrons’ right to nominate the chiefs; and Senecas became involved in national and international competition in long-distance running and in lacrosse.

The Seneca Nation also achieved noteworthy political successes in this period. The Senecas resisted allotment, and thus saved their reservations from breakup and sale. They recruited powerful allies, including attorneys, congressmen, journalists, and religious leaders. They saved their Oil Spring Reservation, winning a U.S. Supreme Court case against New York State on the issue of taxation and won remuneration in their Kansas Claims case. These efforts laid the groundwork for the Senecas’ postwar endeavor to seek compensation before the Indian Claims Commission and pursuit of a series of land claims and tax lawsuits against New York State.

Laurence M. Hauptman is Distinguished Professor Emeritus of History in the State University of New York, College at New Paltz, and the author of several books on the Iroquois in New York state.