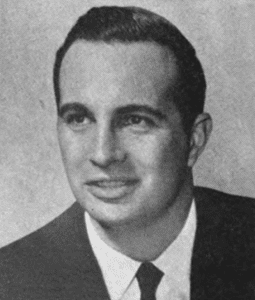 Reid led an eventful and historic life. He grew up in a McKim, Mead & White-designed stone castle in Purchase, New York, built by his grandfather – himself a Republican powerbroker, ambassador, and 1892 vice presidential nominee. After service in the Army during the Second World War, at the age of 30 in 1955, Brownie assumed leadership of the “family” newspaper, the voice of moderate, internationalist Eastern wing of the GOP. And, like fellow New Yorkers Nelson Rockefeller, Jacob Javits, and John Lindsay, Reid was forced to uncomfortably straddle a Republican party morphing rightward; like Lindsay, he eventually switched parties.

The Reid family and the Tribune had long been influential in Republican circles. Brownie’s grandfather, who acquired the paper in 1872, had helped James Garfield win the Presidency in 1880. And with Republicans’ 1940 choice of Wendell Willkie as their Presidential nominee, “no newspaper people may ever have exercised more decisive influence upon the nomination of a major party candidate than Tribune staff members did,” wrote Richard Kluger in The Paper: The Life and Death of the New York Herald Tribune. Willkie lost to Franklin Roosevelt, but the paper stayed close to Republican leaders, and William E. Robinson, who served the Reids as editor and then publisher in the early 1950s, was one of Dwight Eisenhower’s closest friends – and helped convince Ike to run for President.

Barely 18 and fresh from Deerfield Academy, Ogden Reid in 1943 had rushed to serve in World War II, enlisting as a private, serving in the 11th Airborne Division, and rising to first lieutenant by the time of his 1946 discharge. He later served as a captain in the Army Reserve. 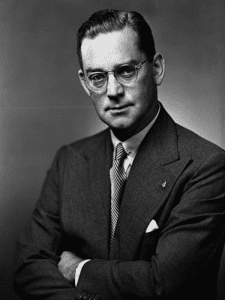 After his 1949 graduation from Yale (a year behind fellow veteran George H.W. Bush), Reid joined the family business at 24, starting in the mailroom and serving as a photographer and reporter before moving to Paris to oversee the European edition. In 1955, he became editor and publisher, taking over from his older brother Whitelaw, known as “Whitey.” The paper, admired for such writers as Walter Lippmann, Dorothy Thompson and Red Smith, struggled financially for decades. Though profitable during the war and dominant in the suburbs, the Tribune was long pressed by labor troubles, poor business decisions, and the aggressive growth of the arch rival New York Times. Brownie Reid introduced reader contests to boost circulation, but the family decided to sell, ending its 85-year stewardship in 1958. Ike successfully urged his friend John Hay “Jock” Whitney, ambassador to Great Britain, to buy the paper and keep it afloat. Its final demise came in 1967.

By late 1958, at the age of 33, Brownie Reid was a man without a company. Over the next few months, the Eisenhower Administration began considering different uses for this well- connected young Republican – including, according to a January 1959 front-page story in the Times, a Central Intelligence Agency post, a White House staff job, and a role as special assistant to Secretary of State John Foster Dulles “in charge of coordinating international educational and cultural relations.” Instead, in March, Ike nominated Reid as Ambassador to Israel and he was confirmed by the Senate in June.

During 18 months in Tel Aviv, Reid worked closely with Foreign Minister Golda Meir to ensure Israel’s positions were effectively communicated to the U.S. State Department. When Eisenhower left office in early 1961, Reid returned to the U.S.; in June, Republican Gov. Nelson Rockefeller appointed him to the State Commission on Discrimination.

By early 1962, political reporters began to hear rumblings about a run for Congress; in February, the GOP town council in Harrison, New York, next door to his Purchase home, recommended Brownie for the 26th District seat then held, inconveniently, by three-term fellow Republican Edwin Dooley. A few weeks later, Dooley charged that “top Westchester officials” – presumably County Executive Edwin Michaelian – had asked if he would step aside if offered a to-be-created post of state Director of Physical Fitness. “When I refused to participate in this game of musical chairs,” Dooley told the Times, “I made it abundantly clear I was in this fight to the finish.” Backed by a raft of GOP leaders including boss Michaelian, Reid, 37, defeated Dooley, 20 years his senior, in the September primary with 54% of the vote, and easily defeated Democratic New Rochelle Mayor Stanley Church in the November election.

Reid – whose positions became increasingly progressive, including opposition to the Vietnam War – won his next three elections handily, but faced a stiff 1970 primary challenge from White Plains conservative Michael Coffey, who came within 2,200 votes. Reid then won the general election with 66% of the vote.

During his House tenure, Reid supported antipoverty and civil rights legislation and, according to his recent Times obit, “voted so often with the House’s Democratic majority that some conservative Republicans said the initials O. R. stood for ‘Occasionally Republican.’ ”

“Leaving the Republican party is a much tougher wrench for Representative Ogden R. Reid than it was for Mayor Lindsay,” the Times editorialized. “His grandfather was a founder of the GOP… The Westchester Congressman was the last member of his family to edit The New York Herald Tribune in its long career as a voice of intelligent Republicanism.” The Times added, “Still short of his 47th birthday, he brings to the Democrats another future leader of great decency, dedication and talent.” Without primary opposition, Reid focused on his general election battle against Westchester District Attorney Carl Vergari. Rockefeller, annoyed at Reid’s party switch, helped Vergari raise money, but in November, Reid hung on to win his sixth term in his closest general election race, edging Vergari by fewer than 10,000 votes out of more than 200,000 cast. It would be Brownie’s last election victory.

A year later, in December 1973, he announced he would not seek re-election to Congress but would instead run for governor, with his only major Democratic opponent the chairman of the New York City Off-Track Betting Corporation. A week later, however, Rockefeller suddenly resigned after 15 years; soon there were four major Democratic candidates for what now seemed a winnable race. But after spending nearly $1 million and failing to gain traction outside of Westchester, Reid dropped out in June 1974. Hugh Carey won the September primary and was elected Governor in November. Reid’s electoral career – aside from a failed 1983 run for Westchester County executive – was over. He was not yet 50.

Reid served for 16 months as Commissioner of Environmental Conservation in the Carey Administration, resigning in May 1976 because he disagreed with Carey’s handling of General Electric’s discharge of toxic PCBs into the Hudson River. In 1985, Reid chaired a five-month investigation of Westchester’s garbage program. He remained a member of the Council on Foreign Relations, but remained largely out of the public eye until his death March 2.

Scion of a powerful family and briefly steward of its remarkable if rapidly-fading newspaper, a liberal whose party moved away from him, Ogden Reid lived at the center of the action from boyhood to middle age. While not well known in recent years, Reid’s story should be remembered as emblematic of an era when, for progressive New York Republicans, the world shifted beneath their feet.