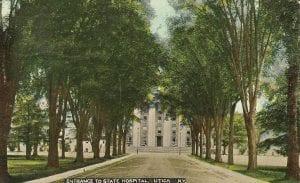 Oneida County Historian Joseph P. Bottini is set to offer an illustrated presentation about the New York State Lunatic Asylum at the Rome Historical Society, Wednesday, April 17th at 7 pm. He will share the founding of this unique institution along with its growth and impact upon the treatment of the mentally ill between the mid-1800s to the 1950s.

Built in 1843, the New York State Lunatic Asylum later became the Utica State Hospital and is locally known as “Old Main.” It was the first publicly-funded institution to care for and treat the mentally ill in New York State. It held a unique position in mental health treatment, giving rise to innovative techniques and new approaches to helping those who were relegated to second-class citizenship due to their illness. The Asylum’s policies were known around the world for being on the leading edge of medical help for the mentally ill.

Some rare and seldom seen photos will accompany the presentation. Pictures of the massive building, with descriptions of its architecturally significant structure, are also included. Some of the program is part of a personal experience when Bottini was a docent for one of the public tours of the building.

Joseph Bottini is a retired school teacher having taught history in Utica for 16 (1969-1985) and New Hartford for 19 years (1985-2004). Joe was appointed Oneida County Historian in 2014. He is co-author of Utica: Then & Now (Arcadia Publishing), a comparative photo history of Utica, and Oneida County – An Illustrated History, a publication of the Oneida County Historical Society. Bottini also was research consultant and editor of Legendary Locals of Greater Utica by James L. Davis. HE is a staff writer of local history articles for Greater Utica, Oneida County’s local history magazine.

The program is free and open to the public.