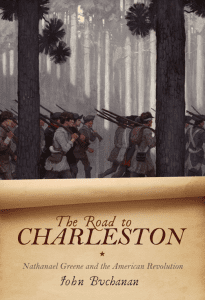 The Fraunces Tavern Museum has announced “The Road to Charleston: Nathanael Greene and the American Revolution” a lecture by John Buchanan, has been set for Thursday, April 18th, at 6:30 pm.

Buchanan’s lecture will discuss how Major General Nathanael Greene overcame these challenges in a campaign directly responsible for driving Lord Cornwallis north to Virginia and Yorktown, where he lost his army- and with it the War.

Nathanael Greene’s campaign in the Carolinas and Georgia was a nightmare of failed logistics, vicious civil war between Rebels and Tories, and military and political turmoil.