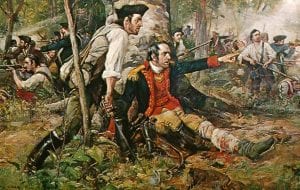 We’ve reviewed the suggestions, and came up with a short list of five battles* which stand out as the most important to us (with short descriptions from Wikipedia) – what do you think?

1664, The English Seize Manhattan Island: In autumn 1664, four English warships with several hundred soldiers onboard arrived in New Amsterdam’s harbor and demanded the Dutch surrender. Although Peter Stuyvesant at least outwardly prepared to fight, prominent city residents persuaded him to stand down, and on September 8 he signed the colony over without any blood being shed in one of the skirmishes of the larger Second Anglo–Dutch War. The English renamed the fort Fort James, in honour of James II of England, and New Amsterdam was renamed New York in recognition of James’s title as Duke of York.

1777, Battle of Oriskany: The Battle of Oriskany on August 6, 1777 was one of the bloodiest battles in the North American theater of the American Revolutionary War and a significant engagement of the Saratoga campaign. An American party trying to relieve the siege of Fort Stanwix was ambushed by a party of Loyalists and allies of several American Indian tribes, primarily Iroquois. This was one of the few battles in the war in which almost all of the participants were American; Patriots and allied Oneida fought against Loyalists and allied Indians in the absence of British regular soldiers. The battle marked the beginning of a civil war among the Iroquois.

1777, Battle of Saratoga: More corectly known as The Battles of Saratoga (September 19 and October 7, 1777) marked the climax of the Saratoga campaign, giving a decisive victory to the Americans over the British in the American Revolutionary War. British General John Burgoyne led a large invasion army southward from Canada in the Champlain Valley, hoping to meet a similar British force marching northward from New York City and another British force marching eastward from Lake Ontario; the southern and western forces never arrived, and Burgoyne was surrounded by American forces in upstate New York. Trapped by superior American forces with no relief, he retreated to Saratoga (now Schuylerville) and surrendered his entire army there on October 17. His surrender is considered the turning point of the American Revolution because it won the foreign assistance needed for a final victory at Yorktown.

1839-45, The Anti-Rent War: The Anti-Rent War (also known as the Helderberg War) was a tenants’ revolt in upstate New York in the period 1839–1845. The Anti-Renters declared their independence from the manor system run by patroons, resisting tax collectors and successfully demanding land reform. As a result, The New York Constitution of 1846 added provisions for tenants’ rights, abolishing feudal tenures and outlawing leases lasting longer than twelve years. The remaining manors dissolved quickly as the patroons sold off the lands.

* Obviously, some of these are not individual battles, per se, but you get the point. Notably missing is a battle the meets the overall criteria during the French & Indian War, although the outcome of the war meant that Northern New York speaks English instead of French today.