I don’t think there’s a more magnificent forest tree or more glorious shade tree than the sugar maple (Acer saccharum); a deciduous tree that matures in 30-50 years, generally growing to between 70 and 90 feet tall, with a crown that turns a brilliant, fiery yellow, orange, or red at summer’s end. The sugar maple is the official state tree of New York, Vermont, Wisconsin, and West Virginia. It’s also the national tree of Canada. And the maple leaf is the Canadian national emblem.

For sugarmakers, this is maple season. Having tapped thousands of maple trees, they now harvest their reward; collecting the sap that brings the region’s maples out of winter dormancy and boiling it down, with pride and care, to just the right consistency for pure maple syrup and the delicious cream, candies, and confections made from maple sugar.

The sweet smell of boiling maple sap has signaled the arrival of spring for many generations. In fact, sugaring is a tradition that’s prehistoric in origin. Long before any European arrived in North America, the indigenous people of the Northeast were making maple sugar. 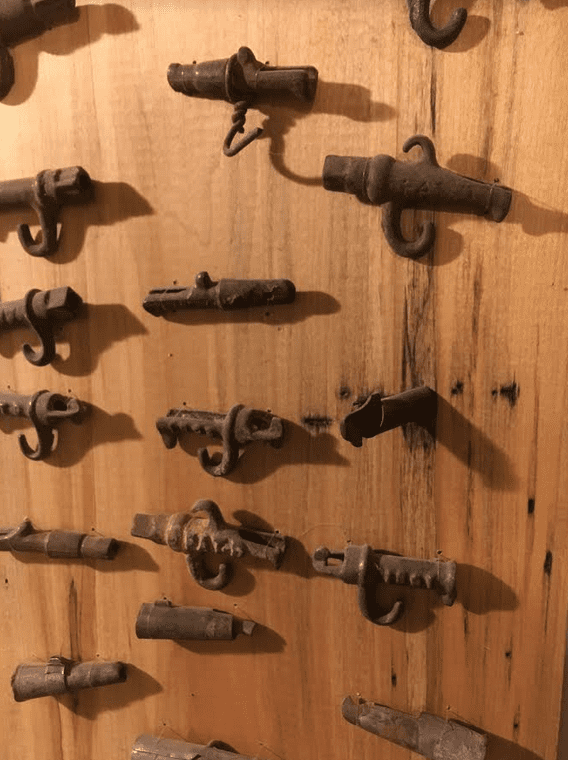 Native American oral history tells of a hunter who learned about the sweetness within the sugar maples after observing a red squirrel biting off the tips of small maple branches and then jubilantly lapping up the sap that dripped from the wounds. As the dripping sap froze, the squirrel returned to enjoy the sweet ‘sapsicles’ left hanging from the chewed-off twigs. Another story tells of Chief Woksis, whose wife used sap flowing from axe wounds in a sugar maple in place of water for cooking, inadvertently boiling down the first maple syrup.

As word spread, people learned to slash the trunks of sugar maples on a diagonal line and collect the dripping sap in birch bark containers. Boiling involved removing hot stones from a fire and dropping them into the sap. They made granulated sugar, cake sugar (sugar poured into wooden molds to form blocks) and wax sugar (sugar on snow).

The Native Americans shared their sugar-making techniques with the early European settlers, teaching them to set up sugar camps in natural stands of maples during the month of sap flow. Settlers drilled holes with iron bits and made taps from softwood or reeds. They used wooden pails or hollowed-out logs to gather sap, which they boiled in large iron kettles hung over open fires. As involved and labor intensive as the process was, importing sugar remained out of the question. Besides, maple sugar that wasn’t used could be traded or sold.

The use of maple sugar remained widespread until inexpensive white cane sugar, produced using slave labor, became the sweetener of choice in most North American households. Although abolitionists ardently encouraged the continued use of maple sugar, their efforts were unsuccessful, and maple sugarmakers began producing maple syrup instead, selling it in bottles and cans.

The first known purpose built maple sugar evaporator was built in Vermont in the late 1800s. It was made of a series of boiling pans within a flat pan. Heated and boiling sap was ladled from one pan to the next. 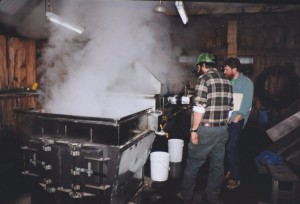 Today’s evaporators are manufactured with compartments and channels that allow sap to be moved through as it reaches graduated stages of evaporation. The evaporator sits on a firebox and flames are drawn along the underside of the pan, heating and eventually boiling the sap as it travels from one compartment to the next. Finished syrup is filtered through felt funnels lined with heavy paper before being bottled.

Airtight vacuum systems and networks of tubing allow sap to be collected in the most efficient and hygienic way possible, effectively lessening the likelihood of bacteria growth while allowing the highest volume production of maple syrup. Collected sap can be pumped through a reverse osmosis machine which, by filtering out up to 3/4 of the water before boiling even begins, saves fuel and time.

Centuries later, we still experience the same maple flavor that the early Native Americans and the original North American settlers enjoyed. And maple syrup production remains a popular and important part of farming to many families in the Northeast.


Richard Gast is a retired Extension Program Educator and has been contracted by Cornell Cooperative Extension Franklin County to continue his informative and thought provoking articles.