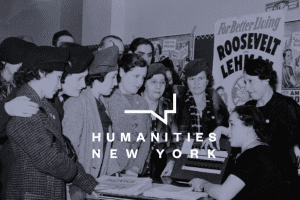 Humanities New York (HNY) has announced just under $150,000 in awards to 31 grantees for innovative public humanities offerings. Awards were made in every region of the state, from the North Country to Long Island.

Action Grants to community presenters enable New Yorkers to reflect on their values and engage with others in their communities. Grant recipients creatively use history, philosophy, literature, and other tools of the humanities to respond to issues and ideas that capture the imagination and passion of New Yorkers today.

Several grant awards will provide funding for programming honoring important commemorations, including the 50th Anniversary of the Stonewall Riots. In New York City, the New-York Historical Society will host a series of events to complement “Stonewall at 50” exhibition. The NYC LGBT Historic Sites Project will make tell the history of these sites with a mobile app, reaching audiences across the city, state and globe. A grant to the Rochester Public Library will focus on the history of Rochester’s LGBTQ+ communities during the Stonewall years.

On Long Island, a grant supporting the Walt Whitman Birthplace Association’s celebration of the 200th Anniversary of Walt Whitman’s birth will invite members of the community to share their voices across cultures, generations, and locations dialogue. In Brooklyn, the Fort Greene Park Conservancy will host a series of events to celebrate Whitman including a walking tour, theater program, and public art installation. Also in Brooklyn, Parachute Literary Arts will host a day-long festival with readings and original songs inspired by Whitman’s best-known work, “Leaves of Grass.”

In anticipation of the centennial of the Nineteenth Amendment in 2020, two grants support the exploration of the history of women’s rights. In Western New York, Lily Dale Assembly will host a weekend event in August that explores the contributions of lesser-known individuals whose stories are not typically included in the dominant suffrage narrative. Sonnenberg Gardens and Mansion, located in the Finger Lakes, will highlight the life and history of suffragists and abolitionists Frederick Douglass and Sojourner Truth, as well as other aspects of life in the region during the struggle for suffrage. Humanities New York encourages community organizations interested in developing programming that examines the legacy of the suffrage movement to apply for a Vision Grant to support planning. Proposals that feature marginalized voices and acknowledge both the successes and limitations of the movement are encouraged.

For more information on Humanities New York, visit their website.