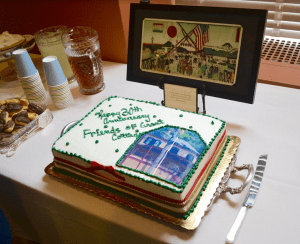 On March 31st, the Friends of Grant Cottage held their Annual Meeting at Saratoga Spa State Park. The meeting is held every spring to discuss the financial standing of the Cottage and their achievements from the previous year, as well as news and special events for the upcoming season.

This year, the program “Ulysses S. Grant and the 1864 Campaign: In Memory and History” was presented by Dr. Andre Fleche, an associate professor at Castleton University. Fleche explored the ways in which the 1864 campaigns shaped Grant’s historical reputation by paying special attention to the difference between the “history” and “memory” of the events in question.

2019 also marks the 30th anniversary of the Friends of Grant Cottage, a non-profit organization that formed to preserve the cottage Ulysses S. Grant lived in while writing his memoirs, and continue the legacy of the Cottage caretakers by telling Grant’s story.

One board member and current chair of the Programming Committee, Melissa Trombley-Prosch, has been with the organization since the beginning and has been influential in preserving this unique historic site. Trombley-Prosch was recognized at the Annual Meeting for her dedication to the organization over the last 30 years. She discussed the impact the Cottage has had on her life and family – spanning three generations – and looks forward to the Cottage impacting many other lives in the years to come.