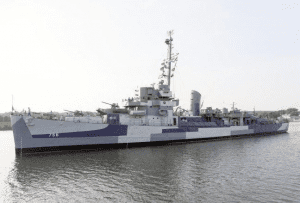 USS Slater is scheduled to open to the public on Wednesday, April 3rd at 10 am. This year will mark the ship’s 22nd season on the Hudson River in Albany, New York.

There have been tremendous changes to the ship since she first arrived, and the USS Slater is considered among the best restored and most historically accurate ships remaining from the Second World War.

A National Historic Landmark, USS Slater is the only remaining World War II Destroyer Escort afloat in America. Destroyer Escorts originally were conceived to battle Nazi U-Boats while escorting convoys across the Atlantic. However, their versatility proved useful in the Pacific defending task forces from Kamikaze attacks. Many Destroyer Escorts continued to serve during the Korean and Viet Nam Wars. The current US Navy Fleet’s frigates are descendants of these small ships.

USS Slater also saw service in Greece’s Navy as AETOS (Eagle). In 1951 Slater, along with three sister ships, was transferred to the Hellenic Navy. She served 40 years as a patrol and training ship before retiring and returning to the U.S.

USS Slater is owned and operated by Destroyer Escort Historical Museum, a private, non-profit organization. The Museum receives no regular Federal, State, or local government financial support. Now is a great time to become a member of the Museum. Members get free admission all season, as well as other benefits. Individual and family memberships are available, starting at just $25.

USS Slater is located on the Hudson River in Downtown Albany. Once open, public hours will be Wednesday through Sunday, 10 am to 4 pm through November. The ship will be closed on Easter Sunday, April 21st. Admission is $9 for adults and $7 for children. Call (518) 431-1943 for more information or visit their website.