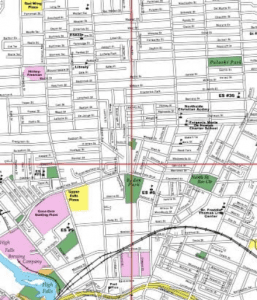 Neighborhoods change. Ours was changing when my single parent mom managed to buy a modest house for cash in Rochester’s Near Northside in 1952.  My mom was an immigrant from Toronto whose own mother had emigrated from England.

She had grown up in this working-class immigrant neighborhood somewhat northeast of downtown. In 1937, she graduated from Vocational High, located in the Bausch and Lomb plant. In 1952 she was newly divorced and had been hired to work on an assembly line – she could walk to work.

Settlement of the neighborhood for worker housing had begun in 1874 when Bausch and Lomb opened the plant. The late 19th century immigrants who came for work opportunity were Irish and German Catholics, German Lutherans, and German Jews. They built wood frame homes on new streets north of the New York Central railway tracks that arced northeastward through the area, separating it from downtown. Once the tracks were elevated and underpasses constructed, there was more settlement by immigrants from southern and eastern Europe and, by 1900, Italian and Jewish families from Poland and Russia. Subdividing deep lots increased housing density; stores, churches, synagogues, schools, and small factories lined the major streets. 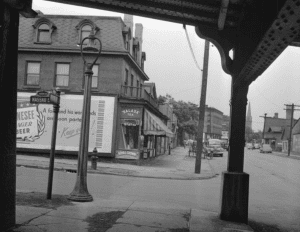 The neighborhood continued to evolve in the post-World War II years as refugees from eastern Europe, and the Holocaust found homes, jobs, and communities of culture on the Near Northeast side. By the 1950s, the in-migration of large numbers of African-Americans from the south was accelerating, and the Puerto Rican population was increasing. The federal Home Owners’ Loan Corporation (HOLC), a New Deal agency created during the Great Depression to refinance home mortgages that were in default, red-lined this quadrant of the city because of the age of the housing stock and the color of its inhabitants.

There were still many German-American residents, businesses, and cultural institutions in the neighborhood when we arrived. St. Paul’s Lutheran Church, one of the city’s first Lutheran congregations to hold services in English rather than German, stood at one end of my street; Weber’s Dairy, started in 1855 by a German immigrant on his farm, was at the other end; Schmidt’s German butcher shop was at the next corner. Because girls were not allowed to be paperboys, my brother Dickie sub-contracted his job delivering the German-language newspaper Abdenpost to me for 50 cents of his $3.50 weekly pay. All well and good until the windy day that my stack of papers blew away while on Joseph Avenue, leaving me on the curb crying.

Jewish families owned many of the grocery, bakery, dairy, drug, and dry goods stores on Joseph Avenue. They lived above, behind, or beside their stores. The Jewish kids that I knew were second and third generation; their families stayed in the neighborhood to be able to walk to Congregation B’nai Israel, and they sent their kids to School 22. My friend Sandy told me that his grandfather had operated a junkyard and how proud he was of his family’s hard work. Another school friend who lived in a duplex showed me the tailor shop in the attic where her grandfather once had his business.

An Earlier Era of Built Form

When I walked along Joseph Avenue to downtown, past the Cotton Club, I was intrigued by the frame houses on the side streets close to the New York Central Railroad underpass. The newest comers had found housing in the oldest sections, closest to the tracks. African American lived in shabby but elegant Italianate houses unlike the worker’s cottages, duplexes, and apartments in my part of the neighborhood. Too young to connect racial injustice to poverty, I found it curious that poor people had better houses than the economically better-off people who lived closer to me. A 1939 Bureau of Municipal Research survey of 4 census tracks in the Near Northeast that included the blocks just north of the tracks confirmed my memory that these once distinctive houses were of a much earlier era than my part of the neighborhood. The survey, an early step toward redevelopment, found that 82.8 percent of the homes were built before 1905 and had suffered deterioration from age as well as neglect. 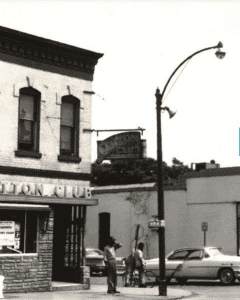 Our family left the neighborhood in 1958; I graduated from high school, went on to SUNY Brockport, and forgot about Joseph Avenue until the 1964 race riots changed it forever. The pent-up rage of African-American youth erupted and was taken out on the nearest targets, among them the Jewish shopkeepers on Joseph Avenue. Rochester’s population of African-Americans had increased from 7,845 in 1950 to about 40,000 by the mid-sixties; conflict between this community and the police and those who loudly resisted efforts to achieve racial balance in the schools had been going on for more than a year.

The Democrat and Chronicle’s July 25, 1964 headline read “About 400 Negroes defied police, stoned passing cars, broke store windows and beat up whites last night in the Joseph Avenue area as the long, hot summer predicted across the country hit Rochester with all its force.”  After those events, Jimmy Breslin reported that neighborhood resident and first African-American elected to the Monroe County Board of Supervisors Connie Mitchell, said:

“I saw mothers right on this block out on the porch and crying. They were pleading with their kids not to go out. And do you know what the kids told them? They told them, ‘Mother, you just don’t understand.’ ” Breslin as reported a conversation with Joseph Avenue shoe store owner Morey Stein, as Stein watched carpenters board-up his store. “Why did they do it to me?” he said. “Why did they pick on me? I’ve carried these people on the books. I had no idea that this was coming. None at all. Why did they do it to me? I carried these people on the books.”  On the one side, shopkeepers, believing themselves to have been fair in their dealings with African-American neighborhood residents, were shocked. On the other, African-American youth saw little prospect for a good life in Rochester. 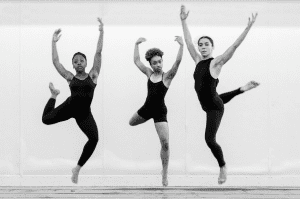 Today this quadrant of the city is mostly African-American and Puerto Rican; the city owns many vacant lots where homes, shops, and workplaces once stood. The beauty of the landscape is still there, despite the many vacant parcels that dominate parts of it. Some historic architecture remains; the building that housed Congregation B’nai Israel is being transformed into an art and culture center by the Joseph Avenue Arts and Culture Alliance. It is just one of several neighborhood groups that are working with the city, the schools and libraries, private companies, and many other committed and resourceful non-profit organizations to make the Near Northeast an affirming part of the history of today’s neighborhood kids. Some day, one of them will write, or paint, or dance their story of growing up here in the early decades of the twenty-first century.