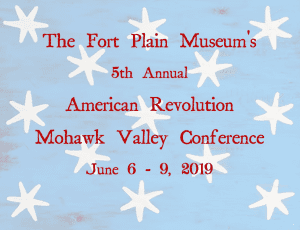 The Fort Plain Museum has announced the 5th Annual American Revolution Mohawk Valley Conference has been set for June 6-9, 2019.

The 2019 Conference will feature a line-up of 12 notable historian/authors presenting on a wide variety of topics related to the American Revolution.

Presenting this year are as follows:

David L. Preston – First in Peace: The Delaware Indian Nation and its 1778 Treaty with the United States

John Buchanan – The Road to Charleston: How Major General Nathanael Greene Dealt with Logistics, Savage Civil War, and Politics in the Carolina’s and Georgia

Albert Louis Zambone – The Rewards of Persistence: Daniel Morgan in the Saratoga Campaign

Presentations start the evening of Friday, June 7th, continue on Saturday, June 8th and finish on Sunday, June 9th. A Lunch will be provided on Saturday and beverage breaks will take place throughout.

The conference will be held at the Canajoharie Central School District Auditorium also known as the Arkell Performing Arts Center (not the Arkell Museum) located at 136 Scholastic Way, Canajoharie.

Bus Tours (Only 1 Bus Each Day)

The Clinton Portage: Sullivan/Clinton Campaign of 1779

Join Mohawk Valley Historian, Wayne Lenig, as he traces the footsteps of General Clinton during their march into Indian Country in 1779. There will be several stops along the way, including the routes traveled, sites of encampments, how artillery was moved, and much more. The trip includes a box lunch, beverages, refreshments and information booklet.

Join Mohawk Valley Historian, Norm Bollen, as he follows in the footsteps of General George Washington during his 1783 trip through the Mohawk Valley. Stops include the General’s visit to Fort Johnson, Currytown, Stone Arabia, Fort Rensselaer, the Herkimer Home, Fort Herkimer and more. The trip includes a box lunch, beverages, refreshments and information booklet.

Bus Trip locations are TBD and posted at a later date.

Visit Mohawk Country historic sites (sites, schedules and admission fees will be posted separately). Sites will have presentations or historians on hand to discuss the families that fought on both sides during the American Revolution.

Join Mohawk Valley Historian, Norm Bollen as he describes the “Incident at Caughnawga” that ignited the Revolution in the Mohawk Valley in 1775. This incident includes neighbor against neighbor, an angry mob and a loyalist sheriff shooting at the rebels. The dinner includes a choice of one of three entrees with sides, salad and dessert. There will also be a Cocktail Hour with cash bar.

The dinner will be held at the Bridge Walk at the Perthshire located at 112 Perthshire Drive, Amsterdam.