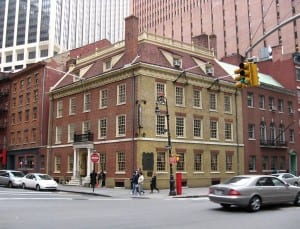 On March 1, Fraunces Tavern Museum revealed the results of its Long Room Enhancement Project to the public for the first time.

Museum Director, Jacqueline Masseo, who spearheaded the project, and Facilities & Operations Manager, Eric Sussman, who oversaw the design’s installation, cut a ribbon at a ceremony attended by the entire Museum staff on February 28.

The room is the historic site where George Washington bid an emotional farewell to his officers on December 4, 1783 following the end of the American Revolution. For over a hundred years since the Museum’s opening 1907, the Long Room has served as a portal to the past for thousands of New York City School children and tourists.

The project involved the combined efforts of Museum staff working to design and install a new reader rail (the structural elements supporting the interpretive panels).  The new reader rail allows a greater number of visitors to comfortably access the room at once; providing them with a closer look at the artifacts in the room.

Updated labels not only recount the tavern’s extraordinary history, but also invite visitors to think critically about how that history has shaped the nation. Interactive components, such as spice jars mounted on the rail and a voice recording of an excerpt of Washington’s Farewell toast, help bring to life the sounds and smells of an 18th century tavern and of the room’s history.

The Long Room Enhancement Project was made possible by a matching grant from the John Ben Snow Memorial Trust and the support of other donors.