The housing stock was old. Our house was built in 1895 by a German immigrant laborer from a pattern book plan, many of which were available in German language editions. It was a classic one and half story, front gable, wood frame worker’s cottage. It provided inexpensive housing for the rapidly expanding workforce needed for mid to late 19th-century industrial cities. When I grew up, my single-parent mom’s assembly line job at Bausch and Lomb Optical Company allowed her to be a homeowner and to support her mother and three children.

As 19th-century cities grew to accommodate industry and its workers, affordable housing was a major concern of social reformers. Rochesterian Katherine Bement Davis proposed building the Workingman’s Model home at the 1893 Columbian World Exposition in Chicago to show that a worker could afford an adequate home. Fair organizers thought building a model home was impractical, so the New York State contributors (led by Davis) enlisted Frederick B. Pratt, son of Pratt Institute’s founder, to support the work of Pratt faculty and students in creating plans and working drawings. Pratt agreed because it furthered his goal of providing comfortable housing for the poor of New York City. The result, shown below, was a two-story frame cottage of 1,120 square feet, 20 feet wide by 28 feet deep, that would fit on the 25-foot-wide lot common in American cities. 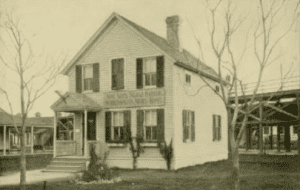 Our raised basement house at 19 Loomis Street was on a similar sized lot, sited so that one side yard was wide enough for the coal delivery van to position its chute at the cellar window above the coal bin. Except for two bedrooms, one in the front gable and the other in a side dormer, the second story was an unfinished attic with exposed rafters. In the view of us kids, an appealing thing about the attic was that you had to go through the single bathroom to get to its stairs. This led to much hilarity, especially when my older brother, Dickie, found an army surplus gas mask and stored it on the stair landing for the use of passers-thorough when someone was on the toilet.

The bathroom was evidence of the economy of construction and materials that guided the design. As in the Davis plan, there was no sink in the bathroom, just a toilet and a tub positioned against an interior wall, the other side of which held the kitchen sink. This arrangement spared having to run water pipes any further than necessary. Her cottage included a bathroom with just a tub and toilet positioned on opposite sides of the same wall as the kitchen sink to reduce plumbing costs.

Our home heating and hot water systems, although state-of-the-art in 1895, matched the uncomplicated plumbing. The dirt floor cellar had a concrete pad for a coal-burning gravity hot air furnace and a gas-fired water boiler. Furnaces transport heat by natural convection (warm heated air rising) through ducts from the basement to vents in the rooms above. The two attic bedrooms shared ducts with bedrooms on the first floor. Dickie, who had the front attic bedroom, rattled chains over his heat register hoping to scare his younger sister and brother into thinking that there were skeletons of ghosts rattling in the attic. We did not fall for it. 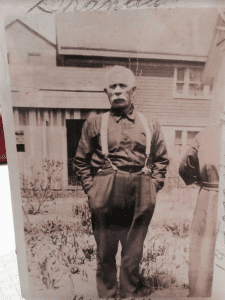 Though simple and absent of mechanical parts that could go awry, the furnace was labor intensive; it was mostly the labor of Dickie. Starting a coal fire was difficult; having it go out was a household calamity. Once started, the fire had to be continuously tended: stoked in the morning, banked in the evening, ashes removed and sifted for chunks of unburned coal that could be rescued and added to the coal bin. Our house was icy cold on winter mornings.

A tank heater next to the furnace was the source of hot water for Friday night baths. Our mother heated hot water for washing us and the dishes in a teakettle on the gas stove. When we needed a larger quantity of hot water, she slid open the door to the hot water tank in the cellar, turned on the gas, and lit it with a match. Because the heated water would flow by convection up to the top of the tank, drawing in cold water from the bottom, hot water would accumulate in the tank from the top down. Feeling the tank with a hand told when there was enough hot water for a bath. There was no automatic shut off; once the tank was full of hot water, the gas had to be shut off; left on, we were told that the tank would explode. When we were old enough to want more frequent evening baths to be presentable to boy and girlfriends, our mother was unhappy about having to stay up until we had filled the tub. She dared not go to sleep and trust us to remember to turn off the water heater This was not a carefree house to live in; the alternative was visible from our front porch. 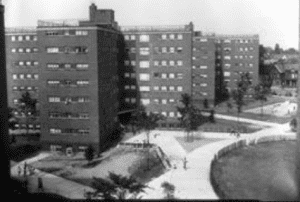 Hanover Houses, seven-story multi-unit buildings completed in 1952, were a half mile south. This new housing, the result of the urban renewal undertaken by the city in the 1950s had updated systems, but far less private space. The trade-off was owning a detached home with a big backyard and separate bedrooms for each of us three kids and renting a more compact, warmer home, with an automatic hot water heater and a sink in the bathroom as well as in the kitchen. Our mother said that even though we were within the income eligibility limits, she did not want to live there. In choosing a home that she could own over a new rental apartment, she compromised comfort for the sake of pride of ownership and more private space.

Unlike the more modern urban renewal housing, there were no smoke detectors in our house and access to the attic bedrooms was by narrow, twisty stairs. We had to be ever vigilant about turning off the gas water heater after the tank was full. Coal was cheap enough to make heating an uninsulated house with leaky single pane windows possible, but it was labor intensive.

Despite its shortcomings, it was a great house for kids. In addition to the amusement of the single bathroom being a thoroughfare, we loved the twisty attic stairs and the attic with unfinished portions providing play space with a big corner by a window that I claimed for a play house, with knee walls forming tunnels to crawl into.

Planners for workforce housing today need to consider space and privacy needs. Detached dwellings may not be possible given budget constraints, but the worker’s cottages of yesteryear have lessons for those creating affordable housing today.