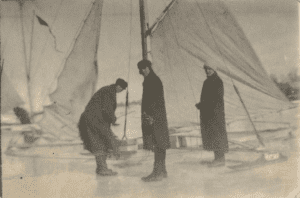 During the years of the War of 1812, winter ice played an important strategic role between the combatants on Lake Ontario. At the eastern end of the lake, decision makers at both Sackets Harbor, the US military headquarters, and Kingston, the center for Upper Canada forces, anticipated invasion opportunities across the frozen lake, and each spring anxiously waited to commence naval operations after the ice left their harbors.

In March 1815, at Sackets Harbor the US Navy commander extended a cordial invitation to a former War of 1812 British adversary, but the lake needed to be ice free: “Commodore Chauncey presents his Compliments to the Marquis of Tweedale, will feel extremely [sic] happy to see the Marquis and his friends at Sacketts Harbor and will with pleasure send them to Kingston the moment the ice will allow a passage.”

After the war, the ice at Sackets Harbor became a smooth and slippery platform for recreation – especially ice boating. According to information on the Web, the first recorded iceboat sail in the country was at Poughkeepsie, NY in 1790. By the 1820s, ice boats provided transportation around Toronto, Upper Canada, at Lake Ontario’s west end.

In the Watertown Daily Times January 1894 “Ice Boating Notes,” the following was reported: “The commanders of the several boats are very anxious for a meet. From Dexter to Sackets Harbor is a distance of six miles. The run is made in six minutes. The skippers don’t give a passenger time to button his overcoat after leaving Dexter, before he is asked to step on the dock at Sackets. One man objected to ride on an ice boat as he did not desire to ride on anything that was so fast ‘that he got there before he started.’”

In April, 1901, a Watertown newspaper  announced “Yacht Races at Sackets – Ten Contestants on the ice on Black River Bay – “Echo” and “Happy-Go-Lucky” the winners.”

The journalist stated: “The Union Ice Yacht Club had a very interesting race on the bay Saturday. The ice was in good condition and a very stiff breeze from the west made it all the more enjoyable.  A large crowd gathered on the ice to witness the sport and at 2pm ten boats started. They were as follows ‘Alice,’ William Crowell; ‘Echo,’ R. Graves; ‘The Elk,’ M. Van Alstyne; ‘Not-In-It,’ Halsey Reeves; ‘Blue Jay,’ J. Jackson; ‘Unknown,’ F. Taylor; ‘Nit,’ F. Gowing; ‘Happy-Go-Lucky,’ E.D. Root; ‘Hoodoo,’ F. Carter; ‘Green Turtle,’ G. Jackson. Although the Walker Cup was not the incentive, the yachts made good time, and finished with Echo first and the Elk second, in first class, and Happy-Go-Lucky, first, and Hoodoo second, in the second class.”

Years later, in March 1915, a trio of young ice boaters experienced a nerve wracking sail on the ice, as told in a Watertown newspaper article headlined: “Ice Boaters on Drifting Ice Pack.” Their adventure earned the title: “All the Harrowing Experiences of Polar Explorers.”

The story starts with the descriptive statement “Shooting a distance of seven miles over an unbroken expanse of ice and then finding that the ice boat they were riding had run away from the solid ice onto a detached cake, far from the shore, was one of the many eventful incidents of an ice boating expedition, which was endured by three well-known young men of Watertown Sunday.”

Then newspaper readers learn that “The trim of enthusiastic winter ice mariners, composed of a young dentist of this city, a member of a leading lumber firm, and an associate of one of the jewelry stores of the city, started out from Sackets Harbor Sunday noon in Captain Crow’s ice boat. The day was crisp, the ice was smooth, and firm, and the craft was in trim, so the three sped far out over the ice, and straight out onto Ontario.”

Their escapade unfolds in the news column as the reporter describes: “an exhilarating race with the wind” toward Pillar Point. One of the men carried a wooden ruler and measured the ice thickness at the crack where they ran from solid ice to a loose floe. Luckily the ice was a foot thick! During this unexpected state of affairs, one young crew member was said to have climbed the mast to be the last one in if they were forced to “take to the water.”

With apparent sailing skills, the men crossed back onto solid ice and the trio continued their afternoon journey further to Point Peninsula, but as luck would have it, the wind died down. The three had to jump onto the ice and shove the boat about 13 miles back to Sackets Harbor, arriving at ten o’clock in the evening.

One member of that adventure was quoted: “Lisa in Uncle Tom’s Cabin has nothing on us,” referring to Harriet Beecher Stow’s novel, when Eliza crossed the river’s ice floes “from slavery in the South to freedom in the North.”

In more recent times, oral histories support ice boating stories centered on Sackets Harbor. Locals tell of ice boating adventures in the 1930s, one young man sitting on the centerboard clinging to the wire struts, hoping the ‘pilot’ could steer the craft away from the limestone cliffs that shelter the inner harbor at Sackets. Today, the Great Lakes remain a mecca for ice boating. During winter months their ice-bound waterways perfectly suit high speed “flying” over smooth ice.