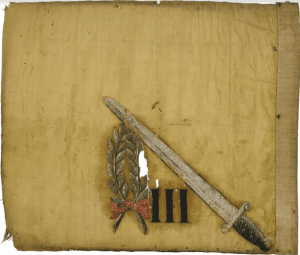 Crane remembered Jerry, “though very meek and innocent, was so taunted, on account of his color, that he went to the brook and tried to wash off the black, and while his tears fell like rain drops on the water, he pushed his hand to the bottom and brought the sand and tried to scour off the black.” The two became intimate friends, and Crane learned that Jerry’s father had a been a soldier in the Revolutionary War and General George Washington’s cook.

According to the story Crane later related, Jerry’s father, Plymouth Freeman, was an African slave before the war who received his name from General Washington as well as his official Army discharge “in Washington’s handwriting, which secured him a pension for life.” A later newspaper article also reported that Plymouth Freeman “claimed to have been George Washington’s waiter.”

Freeman was born in 1742. He said he was the son of a king in Guinea, Africa, and was kidnapped by slave traders as a child and brought to America. Nothing else is known of Freeman’s early years until, at age 35, he enlisted in a Connecticut regiment in the Continental Army in May 1777.  While African Americans were not allowed to join the Continental Army early in the war, the policy changed in 1777 due to both the need for more bodies in the service and the fact that the British had begun enlisting African Americans and offering them their freedom from slavery if they served the King.

The Continental Congress, with the support of General Washington, decided to make the same offer to slaves, and it is estimated that by the end of the war, 5,000 to 8,000 African Americans served the colonial cause. It is unclear where in Connecticut Freeman lived, or if he was a free man or a slave at the time, but one state list of soldiers shows a man listed as “Negro, Plymouth” who joined in the town of Windsor, served 1777-1782 and was listed as “not returned from the Army.”

Freeman served as a private in Connecticut’s 3rd Regiment, 2nd Company and was paid $6.60 per month. All enlistees at the time were promised 100 acres of land at the conclusion of their service.

It’s difficult to ascertain exactly where Freeman was during the war and in what battles his regiment participated, due to the constant transferring among and between companies, regiments, and brigades, but the 3rd Regiment’s highest profile actions were in the final months of the New York and New Jersey Campaign of 1776-1777. Freeman’s regiment was one of the few in the Connecticut Line that was not at Valley Forge during the infamous winter of 1777. While African Americans serving in the Continental Army was not unusual from 1777 onward, there is no way to tell exactly what Freeman’s role was during his service. Some fought on the battlefield, some behind the lines in noncombatant roles (cooks, waiters, valets, etc.) and some served in the Navy. In Freeman’s pension application, the section for “battles fought in” is blank, which may indicate that he served behind the lines rather than in them. 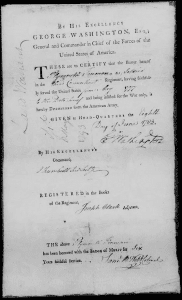 Freeman said he served as a cook and/or a waiter to General George Washington, but there is no evidence to prove or disprove the fact. However, it is known that Washington brought his personal cook and valet with him to the war from Mount Vernon, so it is unlikely that Freeman served General Washington in that capacity. What seems more likely is that Freeman was a cook and/or a waiter during the war and that one or more times he cooked for or served the commanding general. Perhaps the truth that Freeman “cooked for” Washington later became the story that he “was the cook for” Washington. Either way, Freeman served in the Continental Army for six years — a laudable act in itself — until he was discharged on June 8, 1783 and mustered out at West Point. Upon his discharge, he received the Badge of Merit for his six years of service in the army. Where he went from West Point is unknown.

Ten years later, Freeman was issued his 100-acre land bounty for his war service. The land was part of a 4,000-acre tract in the U.S. Military District of Ohio in the Northwest Territory. Federal land warrant records show that Freeman sold his land to speculator John Rathbone, who made a fortune purchasing and then reselling land bounties from Revolutionary War veterans. Veterans typically sold their land bounties at this time, having no interest in making the arduous — and often dangerous — move to the Northwest Territory that was still inhabited by Native Americans fighting to keep their homelands.

It is unclear when Freeman arrived Cazenovia, but he is listed in the 1800 and 1820 censuses for Cazenovia and Nelson, respectively. Some historians claim Freeman lived in the town of Smithfield in 1808 and 1814. However, Freeman did live in Cazenovia in 1806-1809 according to newspaper notices and local records. The ledgers for Samuel Forman’s dry goods store have multiple entries for “P. Freeman, Sr., negro” from Nelson for 1806-1807. 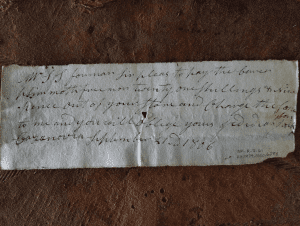 The entries show that Freeman purchased items such as tools, clothing, whiskey, molasses, and other “sundries,” for which he paid not in cash but through trade and labor. The Forman ledgers show Freeman paid his debts with bushels of wheat, by work “in haying,” and by unspecified “work.”  Freeman would also work for others in the town who would sometimes pay his store bills. Seven times his name appeared in the Cazenovia Pilot‘s list of the residents who had letters waiting for them to pick up.  Freeman was a farmer, and had a wife (who died around 1807) and at least one child, his son Jeremiah (Crane’s childhood friend “black Jerry”).

In April 1818, Plymouth Freeman, age 76, being “in need of the assistance of his bounty for support,” applied for his government Revolutionary War pension, to which he was entitled. His application to receive the pension of $8 per month was signed and approved by Madison County Judge William Whipple, and four months later certified in the Madison County Clerk’s Office by Deputy Clerk William Jarvis Hough (later a Congressman). Freeman’s pension was finally issued May 4, 1819, at which time he was paid $135.69 to make up for his 13-month wait.

According to a newspaper report in the Utica Tribune, Freeman also lived at some point in the settlement of New Guinea, a free black village about one mile north of the village of Chittenango on the road toward North Manlius. The report states that the village of New Guinea was named in honor of Plymouth Freeman.

Plymouth Freeman died on August 25, 1829, at age 87, and was buried “in the small cemetery near where had lived” in New Guinea.

Freeman’s son Jeremiah continued to live in the Central New York, first in Chittenango and then in DeWitt. He married and had five children, owned his own house and multiple parcels of land. In October 1879, Jeremiah presided over a meeting of the First African Methodist Episcopal Church as its oldest male member. Less than one year later, in September 1880, Freeman was drawn to serve as a grand juror for the Onondaga County Court — said to have been the first time in the history of the county that a black man was selected for a jury. “Mr. Freeman is an industrious and respected citizen, and a man of intelligence” the Syracuse Daily Courier reported.

Jeremiah Freeman died Sept. 10, 1885, in Battle Creek Michigan. His death record for Calhoun County, Michigan states that he died of typhoid fever, that he was a mulatto, that his father’s name was Plymouth and his mother’s name unknown, and that his father’s occupation was that he “worked for Gen. Washington who set him free and gave him his name.”

Jason Emerson is an independent historian from Cazenovia. He is the author or editor of seven books about Abraham Lincoln and his family members and is currently at work with a co-author on a book about little-known stories from Cazenovia’s history. View his website here.