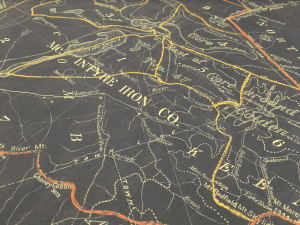 Adirondack Experience, The Museum on Blue Mountain Lake (ADKX), has received a $60,500 grant from the Digitizing Hidden Collections program of the Council on Library and Information Resources (CLIR), an independent, nonprofit organization that forges strategies to enhance research, teaching, and learning environments in collaboration with libraries, cultural institutions, and communities of higher learning.

Past funding from CLIR has supported the cataloging and digitization of more than 15,000 images from the museum’s photograph collections. With this grant, ADKX will digitize 1,308 maps of the Adirondack region in New York State, dating from 1703 to 2004.

The maps show roughly 300 years of human impact on the park, charting the growth of communities, the development of roads and railways, the exploration of the Park’s wild spaces, and the exploitation of the region’s natural resources. Roughly half of the maps to be digitized are unique manuscript maps drawn from three 19th- and 20th-century industrial collections; the Finch, Pruyn Paper Company records, the Emporium Forestry Company records, and the McIntyre Iron Works records.

Created by these lumber and mining companies in the course of daily business, the maps document not only the geographical landscape of the Adirondacks, but also how that environment was exploited for its natural resources in the 19th and early 20th centuries. With cut records showing which trees were felled throughout the Adirondack forests, railroad surveys plotting routes to ship out raw materials, and mining maps showing where workers would pull ore from the ground, the maps vividly show how natural resources were harvested to feed the demands of an industrialized nation.

Once digitized, the maps are expected to be shared online with researchers, students, historians, and the general public through ADKX’s Past Perfect catalog, and also be shared with the consortium catalog New York Heritage. Metadata on New York Heritage is also harvested by the Digital Public Library of America, which would expose these collections to a national audience.