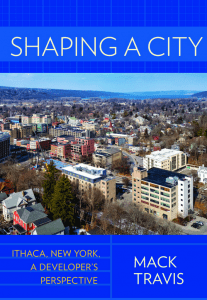 A new book by Mack Travis, Shaping A City: Ithaca, New York, A Developer’s Perspective (Cornell University Press, 2018) is a look at one developer’s involvement, from first buying and renovating small houses, gradually expanding his thinking and projects to include a recognition of the interdependence of the entire city of Ithaca — jobs, infrastructure, retail, housing, industry, taxation, banking and City Planning. It is the story of how he, along with other local developers transformed a quiet, economically challenged upstate New York town into one that is recognized nationally as among the best small cities in the country.

Mack Travis spent his career as a real-estate developer. He is a former president of the Ithaca Business Improvement District, and an active participant in local and regional business development.