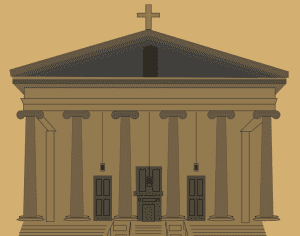 The Historic Districts Council of the City of New York is seeking information on historic place and events related to the city’s Latino Heritage.

The main altar of St. Peter’s Roman Catholic Church, in the Financial District of New York, is embellished with a painting called The Crucifixion, by the Mexican artist Jose Vallejo. Many of the paintings that decorate this church, including The Crucifixion, were donated by Archbishop Nunez de Haro from Mexico City in the late 18th Century.

In 1965, St. Peter’s Roman Catholic Church was designated a landmark of the city by the New York City Landmarks Preservation Commission, one of the earliest designations in the city.

To share information on St. Peter’s Roman Catholic Church or other landmarks or events, send an email to drobayo@hdc.org.