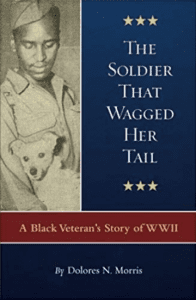 Emmy Award winner Dolores N. Morris is set to speak at the National Lighthouse Museum on Staten Island about her book, The Soldier That Wagged Her Tail – A Black Veteran’s Story of WWII, which chronicles her father William A. Morris Jr.’s wartime experiences with his dog, Trixie, by his side. The event takes place on Sunday, January 20, 2019 from 3 to 5 pm.

The story of William A. Morris Jr.’s service in the all black 369th Coast Artillery Regiment and the 4251st Trucking Company during World War II is a story of a black soldier from Staten Island fighting for a country that is still wrestling with the racism and civil rights.  Morris departed from Pouch Terminal, Stapleton and also returned there at the end of his tour of duty.

Morris’ unique story has a unique heroine, a dog named Trixie. This little terrier mutt found him in England just before D-Day and stayed with him throughout the war, from Omaha Beach to the Battle of the Bulge.

This book follows William and Trixie’s journey from the horrors of war in Europe to the arms of Morris’ family back home.

Dolores N. Morris is a sixth generation Staten Island native. She is recognized for her work in television at Children’s Television Workshop, ABC Television, Walt Disney Television and HBO. Her career has spanned 30 years of producing award winning family and children’s programming, resulting in 3 Peabody Awards, an Oscar mention and 5 Emmy awards.

Admission is $10 for Guests, $5 for Members of the Museum.

For more information or to make reservations, email info@lighthouse@museum.org, call (718) 390-0040, or click here.