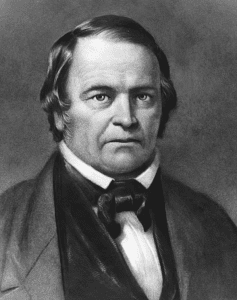 Although speculation about the end of the world has become a growth industry in recent decades, the first modern prediction of the Apocalypse was issued in Upstate New York during the 1830s by a mild-mannered farmer named William Miller.

Born in 1782, Miller grew up on a farm in the tiny hamlet of Low Hampton on the Vermont border east of Lake George. His mother’s family were devout Baptists, but young Bill followed his more skeptical father and became a Deist. While not rejecting religion, Deists discounted the notion that God interfered in earthly affairs.

At the age of thirty-four, following service in the War of 1812, Miller veered back toward religion. He became an “ornament and pillar” of his local Baptist church. But Miller had a restless mind. Now a Christian, he said he didn’t want to believe in a savior “without evidence.” He pondered questions like: “Eternity, what was it? And death, why was it?”

Miller decided that the answer had to be in the Bible. He entered into a detailed study of scripture. He put aside all commentaries, convinced that the Bible was “its own interpreter.” Using only a concordance, he sifted through the verses, studying the context of each word. For two years, he spent “whole nights as well as days” flipping pages and mulling meanings.

Miller was particularly drawn to the numbers in the holy book. He ranged through the pages, studying figures, interpreting them, inserting them into calculations. Days meant years. Multiply 49 times 50 to get 2450. Josiah’s reign ended in 607 B.C. “Take 607 from 2450,” Miller instructed, “it leaves A. D. 1843; when the Jubilee of Jubilees will come.”

In the end, Miller discovered fifteen separate calculations, all of them pointing to 1843. Plugging these figures back into prophetic books like Daniel and Revelations, he became convinced that the numbers were pointing to the second coming of Christ and the end of the natural world. Those who were saved would fly up to meet the Lord, the rest would endure the destruction of the Earth by fire.

That was in 1818. Mankind had only twenty-five years before the end.

The Second Coming of Christ, known as the Advent, was a popular motif of the Christian ferment that had erupted during the early 1800s in upstate New York. Some said the return of Jesus would bring on the catastrophe described in Revelation – the incineration of the earth, followed by a thousand-year reign of peace and good will. Others held that the millennium would come first, the destruction afterward. Neither group speculated on the exact date of the events, although many felt the time was looming.

Miller was confident enough to go out on a limb and make a firm prediction. But he was a reticent, private man, with a limited education and no training in theology. So for years, he managed the three farms he owned around Low Hampton, raised his family, and told only a few close friends and some ministers about his remarkable discovery. “To my astonishment,” he said. “ I found very few who listened with any interest.”

During the 1830s, his sense of urgency increased. The end was barely a dozen years away. He heeded an inner voice that whispered to him: “Go and tell it to the world!” He began to preach the end.

It was no easy task. At fifty, he was hardly a young man. Jolting over bad roads in stage coaches, he trudged the hinterlands in and around New York’s Washington and Warren counties, to spread his message at camp meetings and local churches.

The time was ripe. Devout country people were impressed by his complex calculations, terrified by his insistence that the final curtain was only a few years distant. Events in the news gave him support. The cholera epidemic of 1832, a pyrotechnic meteor display in 1833, comets, eclipses, storms, steam boat explosions — all were seen as harbingers. Something was surely going to happen. 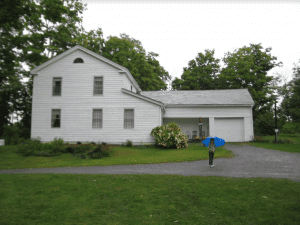 Little by little, interest in Miller’s startling news grew. “There is an increasing anxiety on the subject in this quarter,” Miller noted with satisfaction. His reputation spread, his disciples multiplied, the term Millerites entered the language. But few other preachers would accept his logic. He knew he could not do it all alone.

At an event in New England, he met a thirty-four-year-old preacher named Joshua Himes. The young man was consumed by the truth of Miller’s reasoning. “No time should be lost,” Himes said, “in giving the church and the world warning, in thundertones.”

Spreading an idea required resources. Himes invested his own funds in the cause and rounded up wealthy donors. He recruited prominent preachers to help spread the word. He organized conferences where followers — now called Adventists — could share experiences.

Adventist leaders commissioned the largest circus tent in North America. As high as a five-story building, the enormous canvas enclosure could hold up to six thousand congregants. They started newspapers, distributed pamphlets proclaiming the news.

The Erie Canal provided a convenient means to travel among people who had long been stirred by religious revivals. Miller took his show to Rochester, Buffalo and down into Ohio. Time was growing short; more and more anxious believers were flocking to his message.

The more the Millerite excitement spread, the more its adherents were scoffed at and criticized.

Newspapers called them deluded, ignorant, and blind. Many churchmen opposed them because Adventists were “come-outers,” who rejected fellowship with any church that denied the validity of Miller’s prediction. (Many such congregants had in recent years already come out of their churches to join with proselytizing Mormons.)

Miller looked on his own heated controversy and saw that it was good. Opposition fueled the fire.

And the closer the time of reckoning came, the more the people were aroused. Thousands, tens of thousands fully embraced Miller’s message. Many more, although they might harbor doubts, were moved by the possibility of its being true.

Having begun by saying the curtain would fall “about 1843,” Miller now narrowed the time, based on the Jewish calendar, to the year beginning March 1843. That year passed — the world continued. Rather than admit error, Miller and Himes declared 1844 to be the “tarrying time.” God was holding off the end temporarily to give those who had yet to repent a last chance. During the summer of 1844, some Adventists were convinced by the calculations of one of Miller’s followers, which determined the actual date of the end was October 22 of that year. Naming a specific day sent believers into a frenzy of anxiety and anticipation. All waited for Miller’s verdict.

On October 6, after long thought, Miller accepted the date. End-time fever became epidemic. Writing to friends, Adventists said their final goodbyes. Some gave away their property and left crops unharvested. A shop owner walked away, leaving a note for customers to help themselves. While thousands heeded the “midnight call,” thousands more ridiculed and harassed the devotees they saw as fanatics. 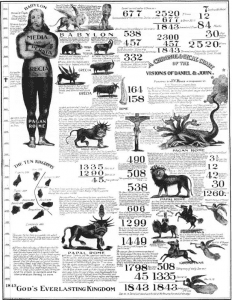 The sun went down — for the last time, the Millerites thought — on October 22. The faithful met together to pray and wait. In Rochester, on that last evening, believers gathered at Cobb’s Hill, a traditional site of Easter-morning services. But later stories of great crowds dressing in “ascension robes” in which they planned to fly up to meet the Lord were exaggerations. Midnight passed. Morning came. The sun rose again.

“Still in the cold world!” a Millerite lecturer sighed after what was called the Great Disappointment. Miller had run out of predictions and excuses. Scoffers now turned on Adventists with a vengeance. In Rochester, in the upstate towns where the millennial fire had burned so bright, mobs wrecked and burned Adventist meeting places, threw stones at the discouraged believers.

The movement fell apart. Joshua Himes tried to raise money to provide relief for those who had given away their property. William Miller died forgotten five years later.

A teenage Millerite from Maine named Ellen White continued to preach a version the Adventist beliefs. Her follower were at first known as Sabbatarians. In 1863, they formed the Seventh-day Adventist Church. The sect has kept Miller’s legacy alive, and today claims 19 million members.

In the years since 1844, countless others have predicted the end of the world. All have been wrong — so far.