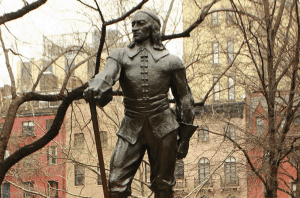 At least one group wants these places renamed and the statue removed. According to Nitsana Darshan-Leitner, the head of the Shurat HaDin-Israel Law Center “Peter Stuyvesant was an extreme racist who targeted Jews and other minorities including Catholics and energetically tried to prohibit them from settling in then New Amsterdam.”

In 1647, Peter Stuyvesant, became the Director General of New Netherland. Stuyvesant increased the number of enslaved Africans in the colony and became the largest owner of enslaved African in New Netherland. Under Stuyvesant’s direction, enslaved Africans labored as caulkers, blacksmiths, bricklayers and masons to make improvements to the slow-growing colony. In some cases, the enslaved were given “half-freedom,” meaning when their labor was not needed and in order to cut expenses for the company, they would be given their freedom. However, this freedom was contingent on the fact that they were bound to provide labor upon demand.  and that their children were not born free.

Towards the end of Dutch control over New Amsterdam, most Africans in the colony continued to be owned and work for the Dutch West Indies Company. Stuyvesant, who owned forty slaves, was the largest private slave owner. In 1660, he supervised what was probably Manhattan’s first public auction of human beings. The largest cargo of enslaved Africans, 290 people, arrived in New Amsterdam in 1664 on the Gideon, just before the colony was taken over by the British. Peter Stuyvesant and company officials in the Netherlands corresponded about the need for additional labor and the importing of more enslaved Africans.

In regard to the negroes which the hon’ble directors ordered to be sent hither, they ought to be stout and strong fellows, fit for immediate employment on this fortress and other works; also, if required, in war against the wild barbarians, either to pursue them when retreating, or else to carry some of the soldiers’ baggage; it being very apparent that we shall be constrained to wage a righteous and offensive war against them, for the peaceable possession once of the land, and the avenging of numerous suffered affronts and murders. An important service would be conferred on the company, on us and the country if there were among the sold negroes, some of experience who have resided a certain time at Curacao.

We hope and trust that by complying with such price and terms, we shall avoid all suspicion of self interest. I am willing to take my share of the expence and risk of their passage hither, because I desired the negroes for my own service and the promotion of agriculture

Director Stuyvesant To The Directors At Amsterdam (1664)

This day fortnight arrived here your Honors’ Vessel, the Musch [Sparrow], with forty head of slaves, sent to us by Vice Director Beck to procure provisions and all sorts of timber work, fix ox carts and a new rosmill. The negroes and negresses have all arrived safely and in health, but were, on an average, quite old, and as the skipper alleges, rejected by the Spaniards. The product of the greater part appears by the accompanying account of the public vendue. They would have brought more, had they not been so old.

Five of the negro women, who were, in our opinion, unsalable, have been kept back and remain unsold. In like manner, six negroes also, to help to cut the required timber and to perform some other necessary work for the honorable company.

Director Stuyvesant To The Directors At Amsterdam (1664)

Messrs, the directors, and the Commissioners of the Colonie on the South River, have entered into a contract with Simon Cornelissen Gilde, skipper of the Gideon, to transport hither a lot of negroes for agricultural purposes. These negroes will, we hope, have arrived before this letter reaches your Honor, or, at least, be embarked after its receipt. We shall therefore recommend that, being properly provided, they may be dispatched hither as speedily as possible. If it happen that Simon Gilde should arrive with the negroes at the island of Curacao three weeks or a month later than the charter party provides, say, the middle of August, the first installment might reach here before or by the middle of September from Curacao, and the remainder by the middle of October. In that event a fair price might be realized for them.

In 1654, 23 Jewish men, women and children arrived in New Amsterdam after fleeing from the former Dutch colony of Recife in Brazil. When the ship docked, Stuyvesant seized their possessions and ordered they be sold at auction. When this failed to raise enough to meet their debts, Stuyvesant jailed two members of the group and wrote to the Dutch West India Company in Amsterdam asking permission to expel the Jews. Stuyvesant told the company that he “deemed it useful to require them in a friendly way to depart.” However, the company granted Jews permission to emigrate to and live in the colony, “so long as they do not become a burden to the company or the community.”

Not discouraged, Stuyvesant barred Jews from the colonial militia and charged them a special tax because they were not serving. He also refused to issue Jewish merchants trade permits. The company agreed that Jews in the colony could be banned from holding public office, opening a retail shop, or establishing a synagogue.

In 1654, Stuyvesant wrote to Dutch West India Company in 1654 officials that “the deceitful race, — such hateful enemies and blasphemers of the name of Christ, — be not allowed to further infect and trouble this new colony.” He referred to Jews as a “repugnant race” and “usurers”, and was concerned that “Jewish settlers should not be granted the same liberties enjoyed by Jews in Holland, lest members of other persecuted minority groups, such as Roman Catholics, be attracted to the colony.”

When, in December 1655, Dutch troops captured the Swedish territory along the Delaware River, Stuyvesant refused to issue trade permits to Jewish settlers in the new territory. Levy and others wrote to their associates in Holland protesting this discrimination, and the company disciplined Stuyvesant for his actions. The company specified that, from then on, Jews in the colony were allowed to trade and own real estate, but not hold public office, open a retail shop, or establish a synagogue.