The recently-opened Shelter House Café in Newburgh’s Downing Park, brings together several strands of the city’s long and complex history. The brainchild and labor-of-love of restaurateur Stephen Sinnott, it builds on decades of effort by the non-profit Downing Park Preservation Committee to restore the historic park to its former prominence in the life of the city. 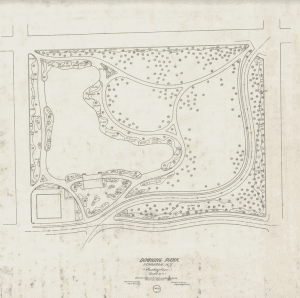 The single-story, stone-façade Shelter House was built in the 1934, under the Depression-era Works Progress Administration. It sits gracefully at the edge of a lovely pond, known as the “Polly” (for “Pollywog Pond”) and was originally designed as a warm place for winter skaters to change to and from their skates and sip hot chocolate. Older locals still have fond memories of Oscar Decker who ran a souvenir stand and sold snacks inside the building.

A rounded wall with curved glass windows on the west side of the structure affords patrons a view of ducks and the occasional heron. A lovely copper beech tree, dating back to the Park’s beginnings, helps frame the scene. The setting blends landscape and structure, in keeping with the original vision of the park’s famous designers – Calvert Vaux and Frederick Law Olmsted. The décor features artifacts commemorating the figure who inspired the park: Newburgh native A.J. Downing.

Downing Park first opened to the public in 1897. Its design was a final collaboration of the storied team of Olmsted and Vaux, best-known for the creation of New York’s Central Park. (Olmstead, of course, is widely considered the founder of America’s urban park movement.) The aging landscape architects took on this assignment free of charge, as a tribute to Downing, their long-deceased mentor and friend 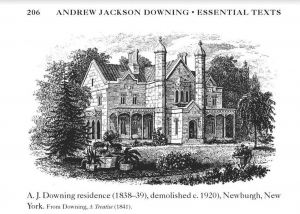 The sadly-brief life of Newburgh native Andrew Jackson Downing (1815-1852) defies easy description. Writer, businessman, architect, gardener, visionary dreamer; the leading modern biography, by historian David Schuyler, labels Downing an “Apostle of Taste”, whose opinions established many of the styles associated with the Victorian period in America. Very few buildings or landscapes designed by Downing survive today; but traces of his ideas can be found everywhere. From lawns to porches to popular plants and trees; from the magnificent parks that enrich American cities to gothic architecture in homes, churches and other public buildings – A.J. Downing’s thoughts can be discerned behind the visible present.

The future “tastemaker” began from relatively humble roots and was largely self-taught. His father had been a struggling carriage wheel maker, on Newburgh’s Liberty Street, until he started a second, more successful enterprise – a nursery – on the same location (across from today’s campus for Mount St. Mary’s College). The father died when A.J. Downing was a child, and responsibility for the business was assumed by Andrew’s older brother, Charles.

Downing’s beloved hometown was uniquely situated at the time. It was a bustling port and commercial center on the busy Hudson River. And it was also at the heart of the scenic Hudson Valley.

The romantic movement – a rebellion against industrialization and the cold rationalism of the eighteenth century thought – was taking hold in Europe, and America’s painters and poets were being drawn to the still-wild scenery of upstate New York. One result was the first significant American contribution to the world of art: the Hudson River School. 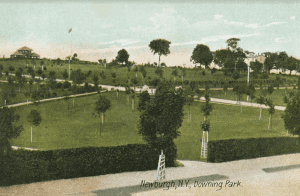 A host of conflicting influences must have converged in the imagination of young Downing, as he followed his brother into the nursery business. His mind rebelled against the ugliness of the developing industrial economy; and he took issue with what he considered the stale rigidity of classical, geometrically proportioned architecture. Observing the plain, unattractive homes of the young democracy’s emerging middle class, he believed in the morally uplifting quality of natural beauty. He also grasped the business potential associated with teaching the emerging American how to live. And he imagined large public spaces that would make nature accessible to the swelling urban populations, from all walks of life.

By the time Downing was 30, he had published three major works: A Treatise on the Theory and Practice of Landscape Architecture, Adapted for North America (1841), Cottage Residences (1842) and (with assistance from brother Charles) Fruit and Fruit Trees of North America (1845).

In 1846 he established a journal: The Horticulturist; and in 1850 published one more book that would help shape the American home: The Architecture of Country Houses.

Downing married into one of America’s grand families. Caroline DeWint (1815-1905) was a great-granddaughter of John Adams, second President of the United States. Downing’s Treatise, his first major work, is dedicated to John Quincy Adams, the nation’s sixth President and Caroline’s great-uncle.

There are no surviving portraits of Caroline. A later visitor to their home, Swedish writer Frederika Bremer, described Caroline as “delicate” and “pretty” and found her to be a perfect hostess for the many friends and guests. But even the feminist Bremer may have underestimated Caroline. It is clear that without the determined, twice-widowed Caroline DeWint Downing Monell, there would be no Downing Park. 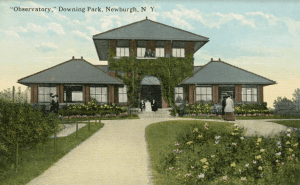 While Downing’s ideas crossed over many boundaries, he spent most of his life close to his roots. There were two trips to England and the European Continent, and of course visits to locations where he had assignments – such as a commission from President Millard Fillmore to design the National Mall and Smithsonian grounds. But many of his concepts were embodied in Highland Garden, a palatial, gothic-style residence and the surrounding grounds, built on the site of the nursery. It housed his family and growing business empire, and some of the best minds in the nation were frequent visitors.

One visitor was Frederick Law Olmsted (1822-1903), a gentleman-farmer who contributed to Horticulturist; and who eventually combined with Calvert Vaux (1824-1895) to bring to life Downing’s vision for an expansive people’s park in New York City. 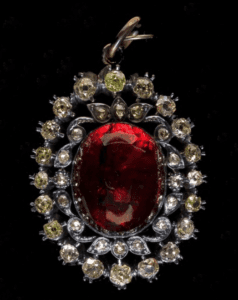 A piece of jewelry – red garnet in a silver pendant, encased in diamonds – suggests the writer’s international renown. Now in the collection of the Museum at Washington’s Headquarters State Historic Site in Newburgh, this item was a gift to Downing from Anna Petrovna, Consort Queen of the Netherlands, in 1845, in recognition of his contribution to the field of horticulture.

In 1850, Downing visited England in search of new ideas and an assistant for the architectural business. There he met an aspiring young architect, Calvert Vaux, at an exhibition that included some drawings by Vaux. It’s the stuff of legend – they talked for hours, and by the evening, Vaux had agreed to move to Newburgh and join Downing’s practice.

By 1852, Vaux was Downing’s partner and they were looking for more help. An ad brought another promising young British architect, Frederick Clarke Withers, across the Atlantic to join them.

The magical confluence of talent and energy was not to last. In July 1852, the notorious Henry Clay steamship disaster on the Hudson took Downing’s life.

Survivors Carry on the Work

Vaux and Withers continued as architectural partners in Newburgh for a few years; but in 1857, Vaux migrated down the river to New York City where he persuaded the city’s leaders to stage a European-style competition for its proposed park and then convinced Olmstead to submit a joint entry.

Withers remained in Newburgh and married one of Caroline Downing’s sisters. Although less celebrated than Vaux, he went on to create many Gothic-inspired churches and other buildings which are still widely admired.

Now-forgotten brother Charles Downing (1812-1885) revised and expanded Fruit and Fruit Trees for decades and was regarded as the nation’s leading expert in pomology. Downing Avenue in neighboring Balmville, New York is named after long-time resident Charles.

Henry Francis Sargent (1810-1882) was an early Downing friend, whose enormous estate across the river – Wodenethe – provided a showcase for the kinds of plantings recommended by Downing. Sargent edited later editions of the Treatise on Landscape Architecture, and is considered a major influence on his nephew, Charles Sprague Sargent (1841-1927), founder of Harvard University’s Arnold Arboretum and a leading figure in American botany. A 1982 study entitled “The Beech in Boston”, traced the area’s much-admired European beech trees to Downing’s ideas, by way of the Sargents. (Some Newburgh residents believe that a handful of magnificent copper beech trees scattered along Grand Street date back to the Highland Garden era.)

A Tribute to the Master

The Caroline survived the Henry Clay tragedy but also lost her mother in the incident; and Highland Garden went to auction to pay the mortgages on the property. In 1865, Caroline married John Monell (1813-1885), a wealthy Newburgh attorney. Monell and his deceased wife Mary had been close neighbors and friends to the Downings; John J. Nutt’s 1891 historical review of Newburgh’s leading institutions and individuals stated that “the two households were as one.”

The newly-remarried couple commissioned Withers to create a new mansion, called Eustatia, on DeWint family property in Fishkill Landing (present day Beacon), and moved across the river in 1867. But they stayed connected to Newburgh, and following her second husband’s death, Caroline took up a new cause – the creation of a park in Newburgh to commemorate A.J. Downing.

She presented city authorities with plans drawn up by her old friends Olmsted and Vaux. The eastern, hillside portion of the park, with expansive views of the river, was largely the work of Vaux; while Olmsted drew up plans for the flatter portions, and especially the Polly. There were inevitable delays and difficulties obtaining sufficient funding. Vaux died in 1895, apparently as a result of falling off a pier on a night-time walk in Brooklyn, and Olmsted was considered too frail to be told of his friend’s death. Their sons completed the project, and it was finally opened to the public in 1897. 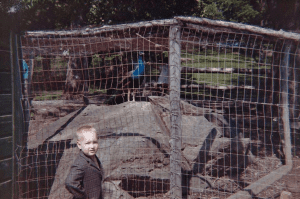 Generations of Newburghers enjoyed the benefits of the park, including peacocks, Sunday music at the bandstand and a glorious tulip garden. But over the years, Downing Park (like much of Newburgh) was not immune to the ravages of time, neglect and ill-conceived urban renewal. An observatory designed by Downing Vaux was demolished in the 1960’s. The Polly became unsuitable for ice skating due to warmer temperatures and the park came to share the city’s reputation as a blighted area.

Key elements of its design were always present, however, and decades of effort and perseverance have brought new life, including a weekly farmer’s market and a day lily garden.

The core A.J Downing vision – to enrich the lives of all members of our democratic society with the values embodied in natural beauty – remains both relevant and challenging today. So this little café, and all the public-spirited citizens who have been contributing to the restoration of the park, can be celebrated for keeping the vision alive.

Caroline and A.J. Downing are buried together (as are John and Mary Monell) in Cedar Hill Cemetery, a few miles north of Downing Park on Route 9W.

Joe Santacroce contributed to this essay. He works as a Principal Consultant for a retail software company. In addition he owns and operates a photography and video business and has completed several documentary films on subjects of interest related to the Hudson Valley. Joe was recently appointed Town of Newburgh Historian.