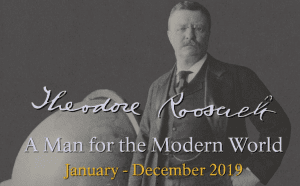 Sagamore Hill National Historic Site has announced a new museum exhibit for 2019, “Theodore Roosevelt, A Man for the Modern World.” The exhibit will celebrate the presidency and legacy of Theodore Roosevelt.

TR led the nation into the 20th century – a time of rapid technological advancement and societal changes that required a leader to be innovative, energetic, and media savvy. The exhibition will open to the public on January 6, 2019, which will mark the 100th anniversary of Roosevelt’s passing.

The exhibit will showcase a collection of historic documents, photographs, and artifacts that celebrate TR’s major achievements and underscore his legacy as a modern president. Highlighted objects include family sporting equipment and the license plate from the Roosevelts’ automobile, shown alongside presidential gifts such as a book inscribed by Booker T. Washington and a coal scuttle given after the resolution of the Anthracite Coal Strike of 1902. Some familiar artifacts from the Roosevelt Home will be on display for close-up viewing, such as an etched silver loving cup given to Edith and TR following a trip to see the construction of the Panama Canal. The installation will include a collection of rarely-seen historic films showing footage from various periods of Roosevelt’s life, including international travel and scenes from his Sagamore Hill home, as well as historic animated cartoons that caricature TR’s distinct features. The exhibition will feature several interactive and educational components, such as a board where visitors can express their thoughts on TR’s presidency, family guides with questions and activities for children, and a take-along activity that visitors can share on social media.

“Theodore Roosevelt, A Man for the Modern World” will be on exhibit at Sagamore Hill’s Old Orchard Museum from January 6, 2019 until the end of the year.