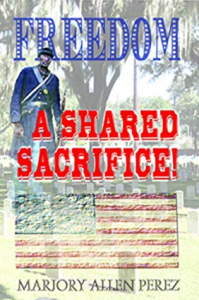 Freedom, A Shared Sacrifice! focuses on soldiers from Western New York who joined black regiments between 1863 and 1865. Beginning with the men who traveled from New York in the spring of 1863 to enlist in the 54th Massachusetts, subjects of the movie Glory, the author documents the history of black regiments raised in the North, as well the soldiers who took part in the epic battle to save the Union and end slavery.

The book includes the story of forty-year-old Private James A. Potter of Sodus, New York who died on April 9, 1865, the same day that General Lee surrendered to General Grant at Appomattox, leaving at home a wife and five children under the age of 12.

By combining genealogical research with traditional study of the regimental and military history of the Civil War, Perez provides the reader with intimate stories of the men and their families as they navigate camp and home life during and after the war years. Extensive use of military service records and pension application files adds depth and texture to the stories. New York’s local historians, civil war buffs and African American family researchers will all find this book a valuable resource.

Freedom, A Shared Sacrifice! is available by contacting Ms. Perez at (315) 946-4562 or at marjory.perez1944@gmail.com and from Amazon. The book’s retail price is $24.95. Discounts are available to libraries, schools, museums, retail shops and bookstores. Marjory Allen Perez is also the author of Last Stop, Freedom: The Underground Railroad Experience in Wayne County, New York, published in 2017.