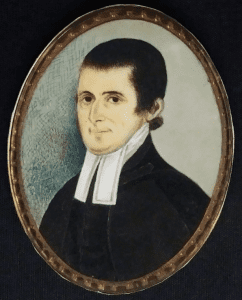 The Mill Street Synagogue, the first synagogue in North America, was constructed in 1730 and located on what today is 26 South William Street in Lower Manhattan. It was from this synagogue that two of the leading Jewish figures in eighteenth and early nineteenth century America, Gershom Mendes Seixas and later Mordecai Noah, influenced the Jewish community in the city of New York and beyond.

Although one of the most important sites in the history of the Jewish people in America, currently 26 South William Street is occupied by an Icon parking garage. It’s across the street from Dubliners restaurant and up the street from 85 Broad Street, the old Goldman Sachs building. In a city of perhaps more than 2 million Jewish residents, there is nothing that would inform a passersby or others of the importance of this place.

The first Jewish settlement of New York was established in 1654 by the party from a ship fleeing the takeover of the previously Dutch city of Recife in Eastern Brazil by the Portuguese (who brought with them the Spanish Inquisition). Recife under the Dutch, had been home to one of the largest Jewish populations in the New World. When the Portuguese took over they gave all Jews (some of whom had lived there for two generations) ninety days to leave.

A flotilla of 15 ships was assembled for various Protestant ports more favorable to Jews, such as London, Amsterdam, and Curacao. When one of these ships, the St Catherine, arrived in New Amsterdam, it was a small polyglot settlement of 1,000 settlers. Upon arriving, they were informed by Peter Stuyvesant, the Dutch Governor General of New Amsterdam, that they were not welcome to stay there and would have to leave.

With the assistance of sympathetic local residents (who being themselves from religious minorities in their native lands were not enamored of Stuyvesant’s anti-Semitic policies) they appealed Stuyvesant’s determination to the Board of Directors of the Dutch West India Company. The Directors, mindful of Jewish investors and their support of Dutch interests in the unsuccessful fight in Brazil, ordered Stuyvesant to reverse his policy. So long as the Jews agreed not to practice their religion openly and not to be a public charge, they could stay. Thus the Congregation Shearith Israel (Remnants of Israel) was formed. This Congregation remains to this day in a building on 71st street and Central Park West, began by worshiping in a mill on Mill Street.

Over the next seventy-five years, the relatively small Jewish enclave prospered and Jewish merchants and craftsmen became more integrated into the community along with the other ethnic and religious minorities. By 1729, New York had grown to a population of about 10,000, and was a relatively small but prosperous merchant seaport. That year the Congregation purchased a plot of land on Mill Street (believed to be at the current site of 26 South William Street) to erect a synagogue.

From the time it opened in 1730 until it was demolished about 90 years later, the Mill Street synagogue was a central anchor for the Jewish community in the city of New York. In 1766, Gershom Mendes Seixas became the Hazzan of Congregation Sheairth Israel, which until the 1820s was the only Jewish congregation in the city. Although not formally an ordained rabbi, Seixas served as the religious and spiritual leader of New York City’s Jewish community for the next 50 years. In doing so, he helped set the tone for how the Jewish community was to integrate into and become part of American society. During the American Revolution he was an ardent supporter of the Patriot cause, and led the historic Spanish and Portuguese congregation in its removal to Philadelphia when the British captured New York in 1776. In Philadelphia he helped establish Congregation Mikveh Israel.

After the British left New York on Evacuation Day (November 25, 1783), Seixas and the Congregation returned to the city and Seixas was an important figure in the Post-Revolutionary Period.

Even though the overwhelming support of the Jewish community for the patriot cause during the Revolution was well known to Washington and other leading American political leaders, Seixas wanted to have a specific statement from President Washington of the position of the Jewish community under the new government. Such a declaration was not long in coming. In August 1790 on a ceremonial visit to the Touro synagogue in Newport Rhode Island (where Seixas brother Moses was a spiritual leader), Washington read his famous “Newport letter” on religious tolerance.

In that letter to the Jewish community in Rhode Island, Washington stated that unlike elsewhere in the world where religious tolerance was sometimes spoken of but not practiced, the United States government would give “to bigotry no sanction and to persecution no assistance.”

He stated that Jews and other religious minorities would be free to practice their religion without government interference. This letter is probably the most important document in Jewish American history and one of the most important presidential letters in American history. For Jews who had faced virulent discrimination and hostility for more than a thousand years in Europe, it indicated that life in the new United States would be entirely different from the places from which they came.

After the Revolution, Seixas continued to serve at the Mill Street synagogue as the leader of the city’s Jewish community into the early 19th century. He was for many years a Trustee of Columbia University (where there is today a Seixas Society) and a number of other civic institutions. He is buried in the Shearith Israel cemetery on Saint James Place in the Lower East Side.

Another important early American Jewish leader who was affiliated with the Mill Street synagogue is Mordecai Noah. Noah, who was born in Philadelphia in 1786, (approximately forty years after Seixas) was a lay leader of Congregation Shearith Israeli in the early 1800s. By that time the area around the Mill Street synagogue had become commercial and many viewed the location as unsuitable because it was far from the residences of most Congregants.

Nevertheless there was such an emotional attachment to the location and the building that it was decided to renovate it. Noah was a politician, writer and controversial diplomat to Tunisia who President Madison fired, claiming he was unsuitable to serve because of his Jewish faith. Noah was active in Tammany Hall and ran unsuccessfully for New York Sheriff and several other governmental positions. He was asked in 1818 to deliver the consecration address at the rededication of the renovated Mill Street synagogue. In that address, he set forth his view that Jews in America should be actively involved in American civil and political affairs, and that there was no contradiction between such activity and their religious beliefs or duties. The speech was widely circulated and commented upon (including by Thomas Jefferson and John Adams).  Noah was considered by many leading American Christian politicians to be the leading spokesman for American Jews on Jewish issues.

Among Noah’s other activities were his promotion of the concept that the Jewish people should form a separate Jewish state of refuge (which he initially proposed to be upstate near Buffalo, but later thought should be in Palestine). He thus is sometimes considered to be a proto-Zionist. In the 1840s, he was also active in trying to influence the American government to actively oppose anti-Semitism and the planned execution of Jews in Damascus. He was also among the founders of a number of Jewish charitable institutions, including Mount Sinai Hospital.

End of the Mill Street Synagogue


By the late 1820s, with the advent of many more Jewish immigrants fleeing persecution in Southern Germany it became clear that the original Mill Street Synagogue, even after the renovation, was outmoded and Congregation Shearith Israel sought larger quarters on Crosby Street in Greenwich village, nearer to the city’s residential districts. What’s more, some newer German Jewish immigrants broke from the more strict orthodox services of Shearith Israel for more modern reform services that were not solely in Hebrew. There arose a number of breakaway reform congregations that would challenge Shearith Israel’s hegemony over all Jewish worship in the city. By the mid- to late-1800s German Jewish merchants and financiers such as Joseph and Jesse Seligman had become a major force in American finance on Wall Street, and in many respects their reform Jewish congregations began to eclipse Shearith Israel as the predominant force in New York Judaism.

I am aware of no marker for the Mill Street Synagogue, Gershom Mendes Seixas or Mordecai Noah in Lower Manhattan or elsewhere in the city of New York. Patrons of the Icon Parking Garage at 26 South William Street, the Dubliners Bar and restaurant across the street or workers at the former Goldman Sachs headquarters at 85 Broad Street are oblivious to the fact that they are at one of the most important places in Jewish American history.

There recently has been some attempt to change this situation, The Lower Manhattan Historical Association, in partnership with American Sephardic Federation, the Temple of Universal Judaism and the Sons of the Revolution of the State of New York (owners of the Fraunces Tavern Museum located a block away) have successfully applied to Manhattan Community Planning Board No. 1 to recommend to the New York City Council that the relevant stretch of South William Street be co-named “Mill Street Synagogue Way” and to have a plaque placed near there in honor of Gershom Mendes Seixas. City Councilwoman Margaret Chin has sponsored a resolution.

In addition, for the last five years, on every July 4th after the Lower Manhattan Historical Society’s July 4th Parade, there has been a ceremony in front of Fraunces Tavern around 3 pm in which George Washington’s Newport letter is read in its entirety. These efforts will hopefully help to educate New Yorkers about the importance of Lower Manhattan in the history of the Jewish people in America.

Portrait of Rev. Gershom Mendes Seixas, c. 1784, located at Museum of the City of New York.