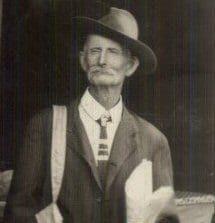 The Altona Flat Rock is a rare and spectacular site I’ve referenced here in the past, and was the subject of my first book written long ago (it was updated in 2005 with new glaciology information). Besides details on the unusual topography, glacial remnants, an incredibly persistent fire, and one of the world’s largest dams when it was built in the early 1900s, there was also a human history to tell.

The forbidding landscape, similar to expanses in Maine, was conducive to the growth of blueberries, the harvest of which evolved into a phenomenon. Entire families established temporary villages of tents and shacks on the Flat Rock from July into September, picking thousands of quarts for sale to local customers and East Coast markets, including Boston and New York City.

A similar business was conducted at the same time on what today is known as Fort Drum in Jefferson County. It was originally known as Pine Camp, located on a several-thousand-acre area that historically bore the name of Pine Plains. While the Altona site in Clinton County was known locally as the Blueberry Rock, Pine Plains near Watertown was known for producing great quantities of huckleberries, a close “cousin” fruit that provided the nickname for our subject, Charles Sherman.

Sherman was born in the city of Watertown in 1842. His story has been touched upon in a few books that claim his parents, Eli and Maria, died when Charles was young, at which point he and his brother, Robert, went to live with their maternal grandfather, Thomas Reed, and his family in the town of Champion, several miles east of the city. However, the brothers had been living with their grandfather for more than ten years when Eli died in New York City in 1865. The family had fractured in the early 1850s when Eli and Maria sought to end their marriage through court action.

Reed raised the boys to adulthood, by which time Charles was working as a peddler. He married a local girl, Della Palmer, in 1871, and settled on the family property, remaining there with his aunt after his grandfather died. By 1879, he and Della had two daughters, and Charlie was well on the road (literally) to an unusual career as a salesman. Traveling hundreds of miles across Jefferson, Lewis, and St. Lawrence Counties, he peddled a variety of items, some of them based on seasonal availability. As the job entailed, he sold himself as well, charming customers with fast-talking ramblings on a range of subjects, a sharp wit, and sales spiels frequently punctuated with song and rhymes. 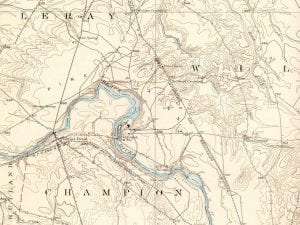 That was Charlie in a nutshell — a showman with boundless energy, a quick tongue, an intense desire to entertain, and a great affinity for being in the spotlight. His boundless yearning for attention was satisfied by delivering unusual and memorable sales pitches to individual customers, and by thrusting himself into the limelight at numerous events, especially county fairs.

Charlie’s “relationship” with the public was hardly a one-sided affair. He drew crowds wherever he went, and in time became an attraction that enhanced holiday celebrations, fairs, and other public spectacles.

While he sometimes sold pins, needles, and other useful household items, his reputation as a fun and entertaining guy was developed during years of peddling edibles, which also added to his fame through various nicknames. By the mid-1870s, he had already been mentioned in the media as “the jolly mad happy ‘huckleberry man’ of Great Bend.” In the 1880s and 1890s, he was known to some as Cabbage Charlie and to others as Sauerkraut Charlie. Barrels of those products and containers of others filled his sleigh in winter and wagon in summer as he made the rounds. His visits were highly anticipated, prompting word-of-mouth advertising that expanded his reputation, which was good for business and great for his ego. Selling paid the bills, but entertaining was his passion.

In time, one moniker stuck and became his public identity: Huckleberry Charlie. Aside from all the other products he sold, huckleberries stood out. He lived on the fringe of Pine Plains, which became his personal stomping grounds. Of all the hundreds of berry pickers who visited the Plains each year, no one knew the area like Charlie, whose satisfied clientele included many retail merchants in Watertown. 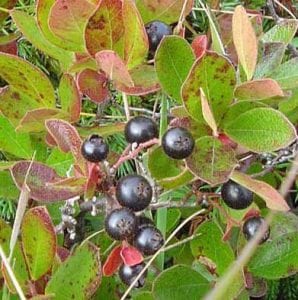 During peak season, he toiled day and night at harvesting and selling. A welcome and familiar sight to customers across three counties was Charlie’s loaded wagon, hauled along by his well-known horse, Black Maggie. Early on, he sold to markets in Syracuse, but local vendors became his primary target. Before canals in the area were supplanted by rail lines, he made the 40-mile round trip to Lowville three times a week with 350 quarts of berries.

While visiting so many fairs and events over the years to sell produce to a large audience, Charlie took advantage of those opportunities to entertain. By the 1880s, his reputation as a folksy, hilarious entertainer matched his fame as a food vendor, and soon exceeded it. People gravitated to him, making his presence valued as a strong crowd attraction.

A typical example from December 1888 was Watertown’s firemen’s fair, a fundraiser for Hose and Steamer Company No. 2. As the Watertown Daily Times reported, there were many booths, raffles, and “lots of fun and amusement. There was a good-sized crowd at the fair last night, and everybody had a good time. After the music and songs by the glee club, Charles Sherman of Evans Mills, better known as ‘Cabbage Charlie,’ was invited to the stage and he created no end of fun by his songs and peculiar contortions.”

In the 1890s, he continued selling vegetables and huckleberries, but more and more, as he entered his fifties, Charlie himself became the product. Folksy sayings, jokes, songs, and holding forth on a wide range of subjects were his bailiwick; he reveled in the attention that followed him everywhere.

North Country newspapers publicized his antics, but a considerable boost to his notoriety came in fall 1900 when a reporter for the Sunday Herald of Syracuse covered his story beneath headlines that included Up North Genius; Huckleberry Charley of the Great Pine Plains; The Greatest “Character” in a Country That Grows Them. “He has the reputation of being able to talk faster than any other man living, and his wit is as keen as a razor…. Huckleberry Charley, one of the most eccentric geniuses ever raised in a section that has been prolific of original characters…. Wherever he goes, he draws around him a crowd who laugh over his quaint conceits and ceaseless flow of badinage [banter, teasing]. He owns a little truck farm at Great Bend, and when the huckleberry season is over, peddles horseradish and sauerkraut all around the country.”

The writer closed the piece with a couple of humorous references. Charlie had recently tried working for the post office, carrying mail from Great Bend to hundreds of customers at nearby Eggleston, but had to give it up because he “got behind on reading the postal cards, and it worried him so, he couldn’t sleep nights.” He also attended revivals (camp meetings) each year at Felt’s Mills and came away inspired, but invariably backslid right away, only to return the following year for another “conversion.”