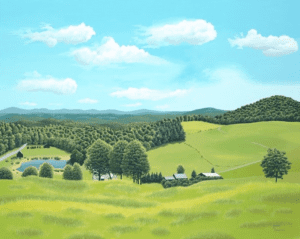 The Hyde Collection has announced its exhibition lineup for 2019. The year begins with an exhibition chronicling the evolution of photography and a nation, then moves on to include works by an up-and-coming regional artist with a pure vision; one of the original Ashcan painters; women modernists; and great twentieth-century Modern masters.

Colorama from the George Eastman Museum, in the Wood Gallery from Sunday, January 13, through Sunday, April 14, 2019:

This exhibition examines the captivating advertisements, offering insight into America and the histories of advertising, photography, and technology. Thirty-six reproduced images from the George Eastman Museum depict an idealized past for a new generation, and a welcome reintroduction for those who lived through the decades that helped shape photography.

Organized by the George Eastman Museum.

From the Vault: Staff Selections, in the Whitney-Renz and Hoopes galleries, from Sunday, January 20, to Sunday, March 31, 2019:

With selections from prominent artists including Winslow Homer, Pablo Picasso, Edgar Degas, and Elihu Vedder, and significantly more obscure artists such as Greg O’Halloran and the Master of Monte Oliveto, From the Vault provides a deeper look into The Hyde’s collection and insight into the people who work at the Museum.

Greenwich (Washington County) native Jacob Houston has charmed audiences throughout the Northeast with his idyllic land- and cityscapes and detailed glimpses into everyday life. With bright colors and enamel-like scenes, he romanticizes the places he travels, re-creating the world as he sees it — full of joy, wonder, and beauty.

For the twenty-eighth year, some of the brightest talent in area high schools will be on display in the annual High School Juried Show, which runs May 4 to June 2 in Wood Gallery. Students from schools in Warren, Washington, Saratoga, Hamilton, and Essex counties are invited to submit works, from which a jury of local art professionals will select 100 to be displayed.

From the Rooftops: John Sloane and the Art of a New Urban Space, in the Wood Gallery, from Sunday, June 16, to Sunday, September 15, 2019:

John Sloan (1871–1951) was a central figure of the Ashcan movement, depicting life in New York City’s rougher neighborhoods through his art. He was among the first to look at the rooftops of the Big Apple, giving viewers a glimpse into the small moments that defined life for the working class.

This exhibition offers an in-depth examination of Sloan’s career-long interest in the gritty urban life found in “the city above the city,” with examples by notable contemporaries, including George Ault, Edward Hopper, William Glackens, and Reginald Marsh.

From the Rooftops, which is organized by the Palmer Museum of Art of The Pennsylvania State University, University Park, PA, is accompanied by a publication.

Picasso, Braque, and Léger, in the Wood and Whitney-Renz galleries, from Sunday, October 6, to Sunday, January 5, 2019:

Picasso, Braque, and Léger: Twentieth Century Modern Masters examines the careers and influence of three of Modern art’s most influential figures, Pablo Picasso (1881–1973), Georges Braque (1882–1963), and Fernand Léger (1881–1955). Each of their art began when Post-Impressionism was en vogue, but they — inspired by Paul Cézanne (1839–1906) — forged their own way, founding Cubism and forever changing the face of Modern art.

Cubism marks the start of the evolution of Modern art. Through it, Picasso, Braque, and Léger left extensive legacies, which are observed in this well-balanced selection of important prints that include some of the best-known examples by each artist.

2016 Artists of the Mohawk Hudson Region, in the Hoopes, Whitney-Renz, and Rotunda galleries, October 11 to December 8, 2019:

The Hyde Collection presents Artists of the Mohawk Hudson Region, an annual exhibition drawn from the works of artists living within a 100-mile radius of Glens Falls and the Capital Region. Juried by prominent regional resident, artist, and educator Victoria Palermo, the exhibition provides a leading benchmark for contemporary art in the Upper Hudson Valley. Working in both two and three dimensions, Palermo explores light and color in works that live in environments ranging from small rooms in private homes to public spaces that include bus stations, airports, and the grounds of museums. With exhibitions across the nation, long-term teaching appointments at Skidmore and SUNY Adirondack, and additional assignments at Williams College and the University of Iowa, she has been featured in Sculpture and the New York Times. She has earned awards from the New York Foundation for the Arts and the New York State Council of the Arts.

The Hyde hosts Artists of the Mohawk Hudson Region triennially, partnering with the Albany Institute of History & Art and University at Albany’s University Art Museum.