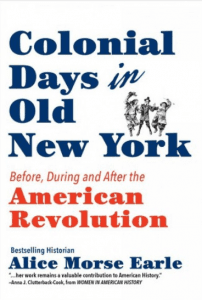 Alice Morse Earle’s book Colonial Days in Old New York: Before, During and After the American Revolution has been republished in a softcover edition by HVA Press, in Warwick, NY.

Born in 1851, at the time Colonial Days in Old New York was first published in 1896, many scholars dismissed Alice Morse Earle’s work. She was criticized as a woman too focused on the details of everyday life, derided as “pots and pans history.” Today, she is better understood as an important source for modern social historians.

Alice Morse Earle was also the author Curious Punishments of Bygone Days, also published in 1896.  In 1909 she was a passenger aboard the RMS Republic when it collided with the SS Florida near Nantucket. While leaving the ship, she fell into the water and nearly drowned, contributing to health problems that led to her death in 1911.

Colonial Days in Old New York by Alice Morse Earle is available wherever books are sold.