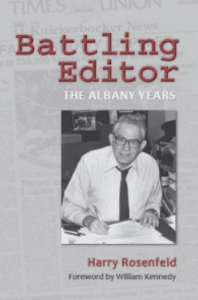 A new book by Harry Rosenfeld, with foreword by William Kennedy, Battling Editor: The Albany Years (Excelsior Editions, 2019) recounts the transformation of two daily newspapers in the face of economic downturns and sweeping technological change.

In 1978, Harry Rosenfeld left the Washington Post, where he oversaw the paper’s standard-setting coverage of Watergate, to take charge of two daily papers under co-ownership in Albany, New York: the morning Times Union and the evening Knickerbocker News.

It was a particularly challenging moment in newspaper history. While new technologies were reducing labor costs on the production side and providing ever more sophisticated tools for journalists to practice their craft, those very same technologies would soon turn a comparatively short-lived boom into a grave threat, as ever more digitally distracted readers turned to sources other than print and other legacy media for their news. Between these boundaries, Rosenfeld set about to do his work.

Picking up where his previous memoir, From Kristallnacht to Watergate, left off, Battling Editor tells the story of Rosenfeld’s time at the two daily publications.

Written at a time when the credibility of news organizations is under attack by those at the highest levels of government, Battling Editor is a full-throated defense of fact-based journalism and hard-hitting reporting at the local as well as national level.

Rosenfeld lives in Albany, New York, where he is Editor-at-Large and a consultant at the Times Union, and also a member of the newspaper’s editorial board.

UPCOMING EVENT: On Monday, December 17, 2018,  during “A Truth-telling Journey: From Newsprint to Bound Pages” at the Hearst Media Center, 645 Albany Shaker Rd., Albany, three notable authors and former Times Union newspapermen – William Kennedy, Harry Rosenfeld and Paul Grondahl – will pay tribute to the so-called “golden era of newspapering” and discuss how their journalistic pedigree influenced their writing in this intimate conversation with Times Union Editor Rex Smith and presented in partnership with the New York State Writers Institute. The trio will touch on the task of writing, truth-telling and the richness of Albany as a subject and fertile ground for journalism and books. There will be time for audience questions.  The program begins with a reception 5:30 pm to 6:30 pm; the main event starts at 6:30 pm with book signing afterwards. The Book House of Stuyvesant Plaza will be on hand so attendees may purchase — and have signed — each authors’ books. Among the titles available will be Harry Rosenfeld’s memoir, Battling Editor: The Albany Years; copies of a new book about Kennedy, Bootlegger of the Soul: The Literary Legacy of William Kennedy, featuring an overview of his literary career, excerpts from his work and more than 50 historical and personal photographs; and Grondahl’s acclaimed political biography, Mayor Corning: Albany Icon, Albany Enigma. Copies of three previously-published books whose proceeds go entirely to the Times Union Hope Fund, including The Story of Albany, These Exalted Acres and Great Dogs of Albany, will also be available.

Tickets can be purchased here: https://www.eventbrite.com/e/a-truth-telling-journey-from-newsprint-to-bound-pages-tickets-53077358809