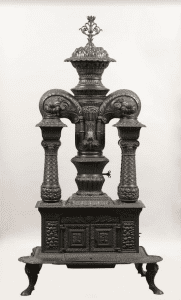 The Albany Institute of History & Artis is set to open a special exhibition of cast iron stoves on Saturday, December 15, 2018. Researchers, collectors, and those new to cast iron will have the opportunity to see these stoves together and their details up close for the first time in ten years. Heavy Metal: Cast Iron Stoves of the Capital Region will run through August 18, 2019.

During the nineteenth century, Albany and Troy, New York, manufacturers were considered to be among the largest producers of cast-iron stoves in the world. Stoves made in these cities were renowned for their fine-quality castings and innovations in technology and design. The strategic location of Albany and Troy, located nine miles apart on opposite banks of the Hudson River, afforded easy and inexpensive transportation of raw materials to the foundries, and finished stoves to worldwide markets.

Cast-iron stove making reached its highest artistic achievement and technological advancement between 1840 and 1870. Flask casting and the advent of the cupola furnace permitted more elaborate designs and finer-quality castings. Stove designers borrowed freely from architectural and cabinetmakers’ design books, a process that resulted in the use of Greek, Roman, Egyptian and Rococo revival motifs, patriotic symbols, and lavish floral designs, all reflecting current taste and sentiment. Stoves were given romantic names like “Venetian Parlor,” “Gothic Parlor,” and “The Temple” to enhance their allure and help the buyer identify them when ordering from a catalogue.

Heavy Metal: Cast Iron Stoves of the Capital Region showcases these utilitarian objects as both works of art and technological innovations that made the home more comfortable as well as beautiful. More than twenty cast stoves from the Albany Institute’s collection will accompany early patent models, trade catalogues, and other rare materials to reveal the history of these often forgotten products of American ingenuity and creativity.