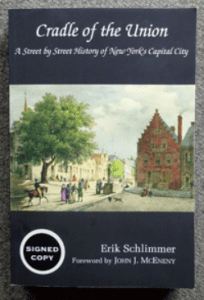 Erik Schlimmer’s new book Cradle of the Union: A Street by Street History of New York’s Capital City (Beechwood Books, 2019) offers help in decoding the names of the 785 streets within the city limits of Albany.

During his four-year-long research project Schlimmer examined nearly 1,000 print and online sources and interviewed historians, residents, and fellow researchers. The resulting 510-page reference includes 130 images, a bibliography and index, and a foreword by former Albany County Historian and Assemblyman John J. McEneny. Traditional street names immortalize founding fathers, war heroes, politicians, Ivy League schools, and Dutch settlers, but others, like Swartson Court, are unique. It’s named for Edward Swarts, who, during the 1940s when his land was being repossessed, murdered his two sisters, attempted to burn their farmhouse to the ground, and then committed suicide.

Schlimmer is most at home decoding names in the Adirondack Mountains. His place name History Inside the Blue Line was released in 2014. Two years later a second one, Among the Cloud Splitters, was published.

The book can be purchased online.

Books noticed at The New York History Blog have been provided by their authors.