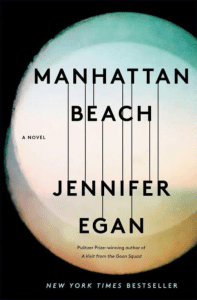 Egan and Orleck are being honored for the work they do bringing workers’ history to life and illuminating its relevance for today. Egan’s most recent novel, Manhattan Beach, and Orleck’s most recent book, We Are All Fast-Food Workers Now, demonstrate just how much workers’ stories matter to understanding history.

Tickets are $50 each. They can be purchased online or by sending a check (made out to the “New York Labor History Association”) to: Loraine Baratti / NYLHA, 116 Pinehurst Avenue, Apt. K-1, New York, NY 10033. Include contact information and an address to mail your tickets.

The New York Labor History Association is a group of historians, labor organizers, activists, educators and others, dedicated to encouraging the study of workers and their organizations.

Jennifer Egan’s most recent novel, Manhattan Beach, which centers on the Brooklyn Navy Yard during World War II, received the 2018 Andrew Carnegie Medal for Excellence in Fiction, and a New York City Book Award. Her extensive research included oral history interviewing with former Brooklyn Navy Yard workers, particularly women, from that time. Egan partnered with the Brooklyn Navy Yard and Brooklyn Historical Society to help create an archive that puts Navy Yard workers’ experiences on the historical record and makes their stories publicly available. Egan’s many novels and short stories include A Visit from the Goon Squad, which won the 2011 Pulitzer Prize and the National Book Critics Circle Award, and Look at Me, which was a 2001 National Book Award finalist. She is a recipient of a Guggenheim Fellowship, a National Endowment for the Arts Fellowship in Fiction, and a Dorothy and Lewis B. Cullman Fellowship at the New York Public Library. Also a journalist, Egan published a cover story in May 2018 in New York Times Magazine about mothers, babies, and the opioid crisis.

Annelise Orleck teaches women’s, labor, immigration, and political history at Dartmouth College. The author of five books and the co-editor of two collections, Orleck combines scholarship and activism. She is co-president and co-founder of Dartmouth’s new American Association of University Professors (AAUP) chapter and is currently active in living wage and immigrant rights campaigns. Orleck’s books – Common Sense and a Little Fire: Women and Working Class Politics in the United States; Soviet Jewish Americans; Storming Caesars Palace: How Black Mothers Fought Their Own War on Poverty; Rethinking American Women’s Activism; and, published in 2018, “We Are All Fast Food Workers Now:” The Global Uprising Against Poverty Wages – weave the personal with the political to tell compelling stories of those often left out of the history books. Orleck also co-edited The Politics of Motherhood: Activist Voices From Left to Right (with Alexis Jetter and Diana Taylor) and The War on Poverty: A New Grassroots History (with Lisa Hazirjian), and she has published in The Guardian, Salon, Ms., Bitch Media, The Conversation, Truthout, and the Progressive.