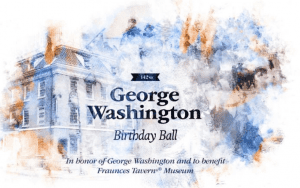 This year’s Sons of the Revolution George Washington Birthday Ball has been set for Friday, February 22, 2019 at 7 pm, at the Union Club, located at 101 East 69th Street (at Park Avenue), New York.

This year’s George Washington Birthday Ball will be held on the date of George Washington’s birthday, and will commemorate the 300th anniversary of the commencement of the construction of the building that became Fraunces Tavern.

Elizabeth and Stanley DeForest Scott will be honored as Patriots of the Year. One of the Museum’s highlights is the George Washington Portrait Gallery honoring Elizabeth and Stanley DeForest Scott. The Scotts have donated hundreds of objects over the years, including a 1778 engraving of New York City’s Fort George and a 1774 depiction of a Boston Sons of Liberty tar and feathering of a customs official, both currently being featured in the Frances Tavern’s new exhibition, Fear & Force: New York City’s Sons of Liberty.