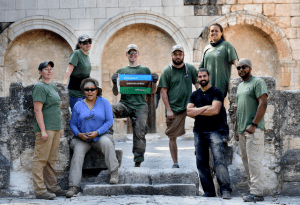 Saratoga National Historical Park has announced a new partnership with The American Battlefield Trust and American Veterans Archaeological Recovery (AVAR) to bring veterans together to undertake an archaeological survey of the Barber Wheatfield, a historic site associated with the 1777 Saratoga battlefield, set for late Spring 2019.

The project is partially funded by a grant from the American Battlefield Trust and will consist of two phases; first will be a metal detector survey and limited excavation, followed by artifact cataloging and documentation.

Iraq, Afghanistan and Vietnam veterans will participate under the guidance of experts from Advanced Metal Detecting for the Archaeologist (AMDA) and NPS archaeologists — a special agreement between NPS, AVAR, and the Trust is expected to ensure the use of modern preservation methods.

The project’s goal is to investigate the artifact patterning in the second battle of Saratoga — a turning point in America’s fight for independence. Findings at the project site, Barber Wheatfield, could help clarify the events that occurred as American and British forces clashed on the battlefield.

For more information about the American Veterans Archaeological Recovery (AVAR), visit their website.

For more information about the American Battlefield Trust, visit their website.